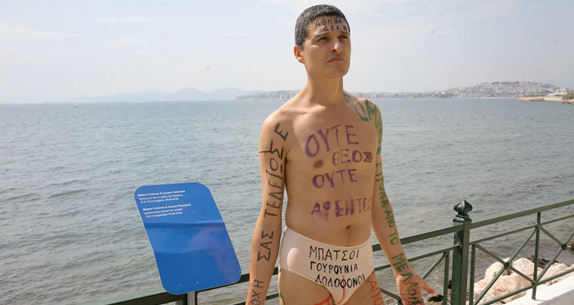 Cesare Pietroiusti's art practice focuses on problematic and paradoxical situations that are hidden in common relationships and in ordinary acts - thoughts that come to mind without a reason, small worries, quasi-obsessions that are usually considered too insignificant to become a matter of discussion, or of self-representation.

In 1994 Pietroiusti was available to do 'useful' things for anyone of the audience who would make a request: he walked dogs, gave shots, cleaned out cellars, and more. In 1997 he published Non Functional Thoughts (ed. Morra, Napoli), a small book containing approximately one hundred useless, parasite or incongruous ideas to be realised as art projects by anyone. Some of these ideas have been executed by artists and curators, such as for the exhibition Democracy! (London, 2000).

In the last few years Pietroiusti mostly concentrated on the topic of the exchange, and on the paradoxes that arise in the folds of economic systems and rules. Starting from 2004 he irreversibly transformed banknotes given to him by other people; distributed thousands of drawings (always unique pieces, individually numbered and signed) for free; sold stories; swallowed banknotes at the end of an auction and subsequently given them back to the successful bidder after their defecation; opened a shop where the goods for sale are banknotes and the currency used to purchase them is the customer's gaze; set up shows where the artworks are for sale not in exchange of money, but of the best visitors’ ideas, comments, or proposals.

- Teacher at the Laboratorio di Arti Visive, IUAV University, Venice, (2004-) and MFA Faculty at the Arts Institute of Boston (2010-).