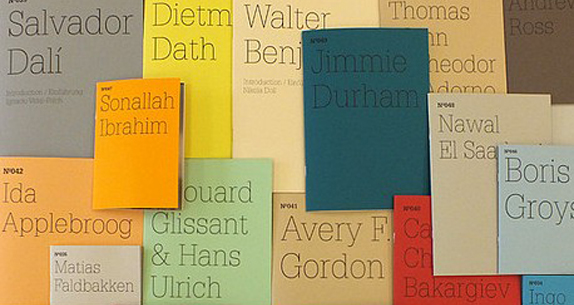 Ashkal Alwan is pleased to invite you to a presentation of the dOCUMENTA (13) notebooks 100 Notes - 100 Thoughts.

dOCUMENTA (13) Head of Department and Member of Core Agent Group Chus Martínez will introduce the series 100 Notes - 100 Thoughts, launched at various places and in various moments, each accompanied by a discussion on the nature and the aim of this publishing project.

This is the ninth public presentation of the dOCUMENTA (13) 100 Notes - 100 Thoughts series, following a premiere in Cairo in April 2011, and presentations in New York, Buenos Aires, Thessaloniki, Paris, Oslo, London, and Mumbai. After this presentation, there will be a conversation on the politics of writing with notebook author Salah M. Hassan and dOCUMENTA (13) Artistic Director Carolyn Christov-Bakargiev.

Salah M. Hassan is Director of the Africana Studies and Research Center and of the Institute for Comparative Modernities, and Goldwin Smith Professor of African and African Diaspora Art History in the Department of History of Art and Visual Studies at Cornell University. Hassan is a curator and has authored several books including Darfur and the Crisis of Governance in Sudan (2009) and Diaspora, Memory, Place (2008). A member of the dOCUMENTA (13) advisory group, Hassan is the author of notebook no. 091 in the 100 Notes – 100 Thoughts series, “How to Liberate Marx from His Eurocentrism: Notes on African/Black Marxism.”