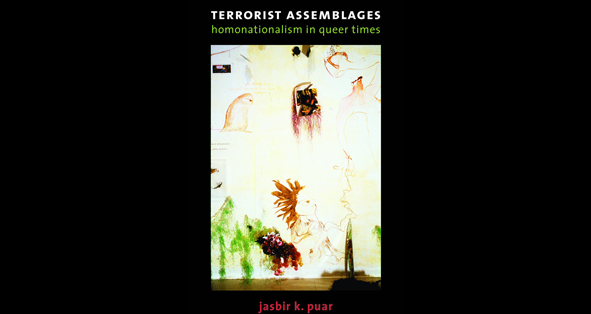 Dr. Jasbir K. Puar is Associate Professor of Women's & Gender Studies at Rutgers University. She has also been a Visiting Lecturer in the Department of Performance Studies at NYU and a Visiting Fellow at the Institute for Cultural Inquiry in Berlin. She received her Ph.D. in Ethnic Studies from the University of California at Berkeley in 1999 and an M.A. from the University of York, England, in Women’s Studies in 1993. Her research interests include gender, sexuality, globalization; postcolonial and diaspora studies; South Asian cultural studies; and theories of assemblage and affect.

Puar is the author of Terrorist Assemblages: Homonationalism in Queer Times (Duke University Press 2007), which won the 2007 Cultural Studies Book Award from the Association for Asian American Studies and has also been translated into French as Homonationalisme. Politiques queers après le 11 Septembre, (Editions Amsterdam, 2012).

In this path-breaking work, Jasbir K. Puar argues that configurations of sexuality, race, gender, nation, class, and ethnicity are realigning in relation to contemporary forces of securitization, counterterrorism, and nationalism. She examines how liberal politics incorporate certain queer subjects into the fold of the nation-state, through developments including the legal recognition inherent in the overturning of anti-sodomy laws and the proliferation of more mainstream representation. These incorporations have shifted many queers from their construction as figures of death (via the AIDS epidemic) to subjects tied to ideas of life and productivity (gay marriage and reproductive kinship). Puar contends, however, that this tenuous inclusion of some queer subjects depends on the production of populations of Orientalized terrorist bodies. Heteronormative ideologies that the U.S. nation-state has long relied on are now accompanied by homonormative ideologies that replicate narrow racial, class, gender, and national ideals. These “homonationalisms” are deployed to distinguish upright “properly hetero,” and now “properly homo,” U.S. patriots from perversely sexualized and racialized terrorist look-a-likes—especially Sikhs, Muslims, and Arabs—who are cordoned off for detention and deportation.

Puar combines transnational feminist and queer theory, Foucauldian biopolitics, Deleuzian philosophy, and technoscience criticism, and draws from an extraordinary range of sources, including governmental texts, legal decisions, films, television, ethnographic data, queer media, and activist organizing materials and manifestos. Looking at various cultural events and phenomena, she highlights troublesome links between terrorism and sexuality: in feminist and queer responses to the Abu Ghraib photographs, in the triumphal responses to the Supreme Court’s Lawrence decision repealing anti-sodomy laws, in the measures Sikh Americans and South Asian diasporic queers take to avoid being profiled as terrorists, and in what Puar argues is a growing Islamophobia within global queer organizing.

In her talk at Ashkal Alwan, Puar will discuss the implications of her work in the context of the Arab uprisings in the Middle East, the debates about "pinkwashing" in Israel/Palestine, and the struggles of LGBTIQ organizing in Lebanon.