Harun Farocki: Introduction to Some of My Films 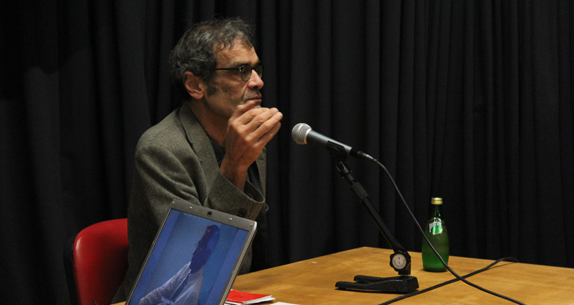 Ashkal Alwan is pleased to invite you to a public talk by Harun Farocki, a visiting professor on the Home Workspace Program 2012-13.

If you only know the documentary film from television then you might believe that such a film could not exist without a voiceover commentary. It is easier to produce or to rework words than images; in industrial documentary film production, words are therefore used to compensate or to amend what images do not have.

We have to examine the functions a commentary can have in a documentary film. If it represents the images like a company represents its work with a business report; or if the commentary really opens up the images or if it takes the effort to study them.

Without the commentary we could hardly align the heterogeneous image subjects of Chris Marker’s Sans Soleil; but nevertheless, each episode has to reveal Marker’s worldview - beyond the commentary. We have to examine in which order the images are structured, independent from any value a commentary ascribes to them.

A commentary is mostly a manifestation of an author’s intention; only in very few cases is a commentary many-voiced or polyphonic.

In feature films, the order of the image sequences is determined by the narration. Documentary films in the silent film era like Flaherty’s Nanook of the North were entirely staged; they had a narration, albeit an open and episodic one.

Direct Cinema was invented in the 60s. It tried to find an event within the reality that proceeds like a story. There are subjects that are very suitable for a narration with the means of direct cinema. The drama of giving birth, for example, became a kind of docu-soap genre. But most of the time the event cannot be planned; therefore direct cinema is a film form that cannot be mass produced.

As early as the 20s, special forms of narration were used to structure a documentary film. Films such as Dziga Vertov’s The Man with the Movie Camera and Walter Ruttmann’s Berlin. Symphony of a Great City did not tell the story of a person or a group of persons but narrated a day in the life of a city.

Finally, here are films whose order does not rely on literature but is deduced from cinematographic operations.

El Valley Centro by James Benning contains 35 shots, each filmed on a 30-metre film roll. The static camera and the duration of the shot generate the rules here. Similar characteristics of cinema can become structuring principles. The term ‘sampling’ from digital musical practice gains a new application in this very context.