An Artist Talk by Hassan Sharif 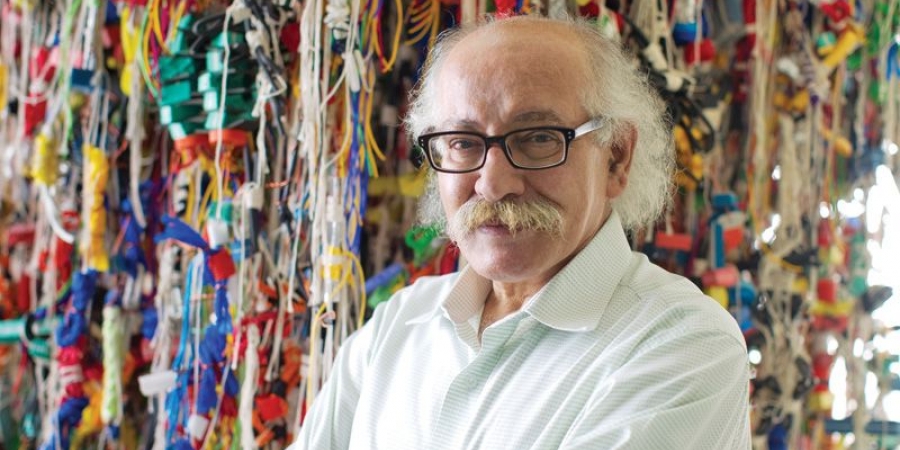 Born in Dubai, where he lives and works, Hassan Sharif received his Diploma in Fine Arts and Design from the Byam Shaw School of Art in London. A founder and member of the Emirates Fine Art Society, he has started as a caricaturist and columnist publishing in the 1970s hundreds of sketches and articles on local newspapers and magazines, an “educational” path completed by the publication of four books (New Art and Sharp Tools for Making Art, 1995; Concept of Art, 1997; Al Khamsa, 2003).

Expressing himself in a wide variety of media (paintings, objects, semi-systems, experiments, performances), Hassan Sharif has extensively participated in exhibitions, biennials and shows both in the UAE and abroad, thus considerably contributing to creating awareness about the Emirati art scene. His works have been widely collected by international museums and institutions apart from numerous private collectors.

Catherine David studied Linguistics and History of Art at the Université de la Sorbonne and Ecole du Louvre in Paris.

From 1982 to 1990 she was Curator at the Musée national d'art moderne, Centre Georges Pompidou and from 1990 to 1994 at Galerie Nationale du Jeu de Paume, both in Paris.

From 1994 to 1997 David served as Artistic Director for documenta X in Kassel, Germany, and from 1998 on is Director of the long-term project Contemporary Arab Representations produced by Tàpies Foundation in Barcelona.

In 2000 she organized The State of Things for Kunst Werke, Berlin. Between 2002 and 2004 David was Director of the Witte de With Rotterdam in the Netherlands.

In 2008 she received the Bard Award for curatorial excellence in New York. In 2009 she was curator of the ADACH (Abu Dhabi Authority for Culture and Heritage) pavilion at Venice Biennal.

In March 2011 she organized the Hassan Sharif exhibition Experiments & Objects 1979-2011 at the ADACH Exhibition hall in Abu Dhabi and will launch the first monographic publication of the artist in Venice Biennale in June 2011.

"Since 1982 I felt there was a gap between conventional painting and conventional sculpture and I was intent on finding an alternative “work of art”. I also realized that my sarcastic outlook on life was a result of my engagement in caricatures that critique the social and political condition and which were published in newspapers and magazines between 1970 and 1979.

I resorted to the idea of ‘redundant repetition’ in producing art. I would continuously engage myself in boring, recurring and endless activities, a feature that would become a signature of my artwork since 1982, underlying purpose.

Despite the fact that my works are based on a sequential, industrial mode of creativity, they also demolish the sequential autonomy of an industrial product. I inject my works with a realism that exposes this socio-political economic monster, allowing people a chance to recognize the danger of over indulgence in this form of negative consumption.

Creating these works requires very simple handicraft that is at once repetitive and non-repetitive. I stay away from complicated technology and I have no secrets, so this is actually something that anyone can do. Hence I chose the tag ‘Weaving’ which requires neither strenuous physical activity nor unique skill. All that is required is a pair of hands and minimal effort." - Hassan Sharif