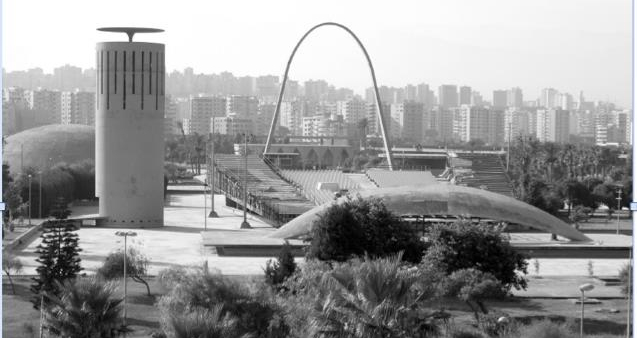 Symposium from April 18th to 21st, 2013, at Ashkal Alwan, Beirut Art Center, and the Mansion in Beirut, and the International Fair in Tripoli.

Organized by Suspended Spaces (Brent Klinkum / Jan Kopp / Daniel Lê / Françoise Parfait / Eric Valette), an independent collective set up above all with the desire to work together and with other artists and international researchers. It exists since 2007. It is based in Paris, Caen, Berlin.

The project Regarding Suspended Architecture in Lebanon proposes to bring together European and Lebanese artists and theorists for a common experience. The general objective is the multidisciplinary artistic and philosophical understanding, of a Lebanese reality, envisaged through the prism of a place that particularly resonates with the common history of our modernity: Oscar Niemeyer’s international Fair project in Tripoli.

The question of architecture is particularly sensitive in Lebanon. If many Lebanese sites deserve to be seen under the aspect of restoration, reconstruction or repair, we will pay particular attention to the project developed in the North between 1968 and 1974 by the Brazilian architect. This modernist program remained uncompleted due to the outbreak of the civil war in 1975.

This site will be considered as a common Mediterranean heritage, concerning both the East and the West. Object of desire, abandoned to a too complex or not yet written story, this place has a silent force. This suspended space no longer speaks a functional language but dully resists. We are interested by its very presence, the insistence of its structure to remain up right, and to passively struggle against its fading away, remaining enigmatic in its "being-there" while constantly asking history questions.

Opening of the symposium Christine Tohmé, founder and Director of Ashkal Alwan, the Lebanese Association for Plastic Arts in Beirut, and Director of the Home Workspace Program and Françoise Parfait, Member of the Suspended Spaces collective.

Presentation of the Mansion project by Sandra Iché and Ghassan Maasri.

Presentation of the Suspended Spaces project by the collective 11h30 (French)

The Fair in the Urban Planning of Tripoli, Habib Debs

Partners in Crime. About the Complicity Between Photography and Urban Space in Surrealists and Certain Post-war Lebanese Artists, Stefanie Baumann

Round table with the artists of the project: Art as Research

Spaces of the Withdrawal

Talk about Alpi with Françoise Parfait and Brent Klinkum

• Suspended Spaces and Mapping, Lacuna in the Territories…, Denis Briand