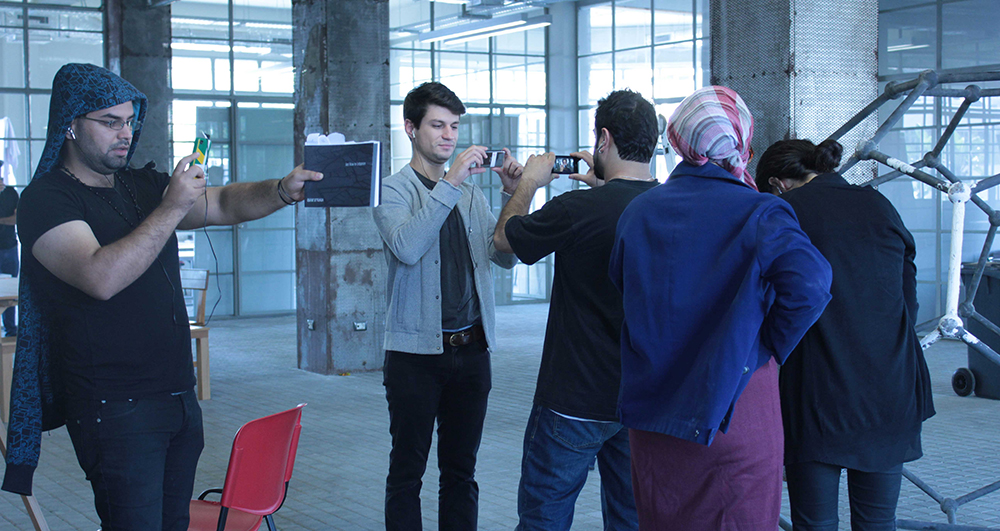 Situation Rooms could be described as a heterotopic form of cinema or as a multi-player 3D video game for 15 users. Each spectator is given an iPod and the audience simultaniously starts to follow step by step, videoframe by videoframe, a short story that has been filmed in the very same place by someone else. As the spectators start to trace the films, a multiple story unfolds.

Home Workspace Program participants will create 15 short video-walks using a methodology developed by Rimini Protokoll at the National Theatre of Wales. Through these multiple short videos, the participants function as both actors and spectators. The prerecorded past turns into the present, unveiling an interactive cinema, which is not just seen, but is a participatory experience.

Rimini Protokoll is made up of Helgard Haug, Stefan Kaegi and Daniel Wetzel, who studied at the institut for 'applied theater science' in Giessen and work together (in various combinations) under this label. They are recognized as being among the leaders and creators of the theatre movement known as "Reality Trend", which has exerted a powerful influence on the theatre scene. Each project begins with a concrete situation in a specific place and is then developed through an intense exploratory process. They have attracted international attention with their dramatic works, which take place in that colourful zone between reality and fiction. Since 2000, Rimini Protokoll has brought its "theatre of experts" to the stage and into city spaces, developed with non-professional actors who are called "experts" for that very reason. From 2004 - 2012 Helgard Haug, Stefan Kaegi und Daniel Wetzel were artists in residence at Hebbel am Ufer (HAU) Berlin.