Hacking Rites: Art and Activism in the Virtual Age by Tarek El-Ariss 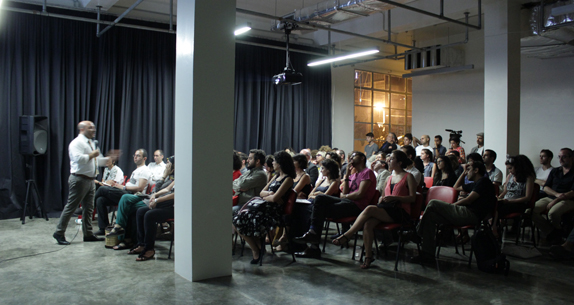 This talk focuses on the tribulations of the Arab author in the age of social media and political upheavals. It examines how artistic and political practices take shape through acts of hacking, bullying, and manipulation. It analyzes the ways in which a complex interplay of aesthetic, commercial, and political forces shape interactive spaces of literary and artistic production mediated by the Internet, global culture, and travel and displacement in the Arab world and beyond.

Tarek El-Ariss is Assistant Professor of Arabic Studies in the Department of Middle Eastern Studies at University of Texas at Austin. His research and teaching interests include contemporary Arabic literature, visual culture, and new media; 18th- and 19th-century French and Arabic philosophy and travel writing; and affect and poststructuralist theory. He is the author of Trials of Arab Modernity: Literary Affects and the New Political (Fordham University Press) and editor of The Arab Renaissance: Anthology of Nahda Literature, Culture, and Language (Modern Language Association), both forthcoming in 2013. He is the EUME postdoctoral fellow at the Wissenschaftskolleg zu Berlin (2012-2013). His new book project examines new media’s effects on Arabic artistic and political practices by exploring the way modes of confrontation, circulation, and exhibitionism shape contemporary writing practices and critiques of power.