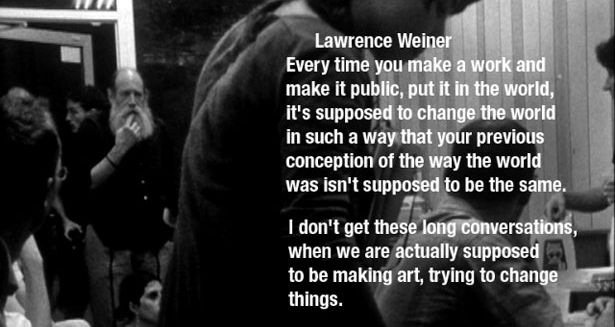 New York Conversations is a text film. Shot in a Chinatown storefront converted for this occasion into an improvised kitchen/restaurant, the film documents three days of public conversations between artists, critics, curators, and a free floating public. The talks, lunches, and dinners were organized by Rirkrit Tiravanija and Anton Vidokle in response to an invitation by Brussels-based art journal A Prior to be the subject of their new issue. Instead of commissioning essays or producing artwork to be printed in the journal, the artists decided to rethink the structure by which an art publication is produced and to attempt to do this discursively in a public setting. The film is a subjective record of these conversations, which explored various topics ranging from questions concerning precarious and immaterial labor in the field of art, possibilities for non-alienated life and working conditions, the feasibility of artistic freedom, and possible means of reclaiming dignity in the work of art criticism, to more immediate questions concerning whether what was actually taking place throughout the course of the event was in fact an artwork. In the tradition of underground cinema, essay films, and experimental language-based films from the conceptual era, New York Conversations insists upon a certain degree of participation from the audience, by way of critical reading. With: Francisca Benitez, Nico Dockx, Daniel Faust, Media Farzin, Liam Gillick, Egon Hanfstingl, Jörg Heiser, Steven Kaplan, Shama Khana, Anders Kreuger, Miwon Kwon, Valerie Mannaerts, Sis Matthé, Hadley Nunes, Saul Ostrow, Marti Peran, Simon Rees, Els Roelandt, Dieter Roelstraete, Martha Rosler, Joe Scanlan, Maxwel Stephen, Monika Szewczyk, Rirkrit Tiravanija, Jan Verwoert, Anton Vidokle, Lawrence Weiner, Andrea Wiarda, Louwrien Wijers and others.