The Sky Over Beirut: Walking Tour with Tony Chakar 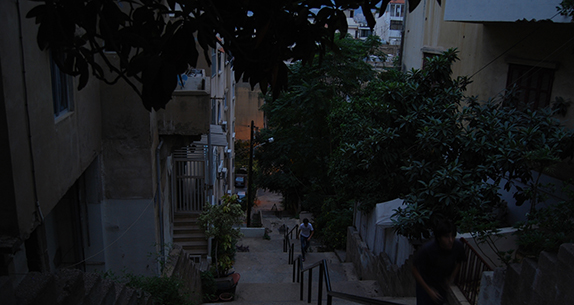 The Sky Over Beirut | Walking tour with Tony Chakar

The Sky Over Beirut

Walking as a series of controlled falls. Walking as a means to redeem what has been lost.

Walking to allow the city to penetrate you through your skin.

Walking to transform what the body touches to extensions of itself.

Walking through other worlds, which are in this one.

Walking on this earth, under this sky.

Tony Chakar is a Lebanese architect and writer whose work incorporates literature, philosophy, and theory, and has been included in numerous exhibitions internationally. His work One Hundred Thousand Solitudes (2012) is a lecture-performance that examines images that have emerged from the Arab revolutions. Chakar shows how unlikely towns outside of the capital cities in the Middle East, once considered backward and marginal, have now emerged as creative centers of the revolt against political oppressors such as Bashar al Assad. The performance also includes an image of a protester in Tahrir Square holding a sign that reads: “From Egypt to Wall St. Don’t be afraid. Go ahead,” demonstrating that Egyptian citizens are vocal and willing to encourage their counterparts in Western democracies to voice their opposition to current representations of authority and power. Chakar contributes to art and architecture magazines and teaches history of art and architecture at the Académie Libanaise des Beaux-Arts, University of Balamand, Beirut.