Portraits and Prayers: Collection of the Salon de Fleurus–New York 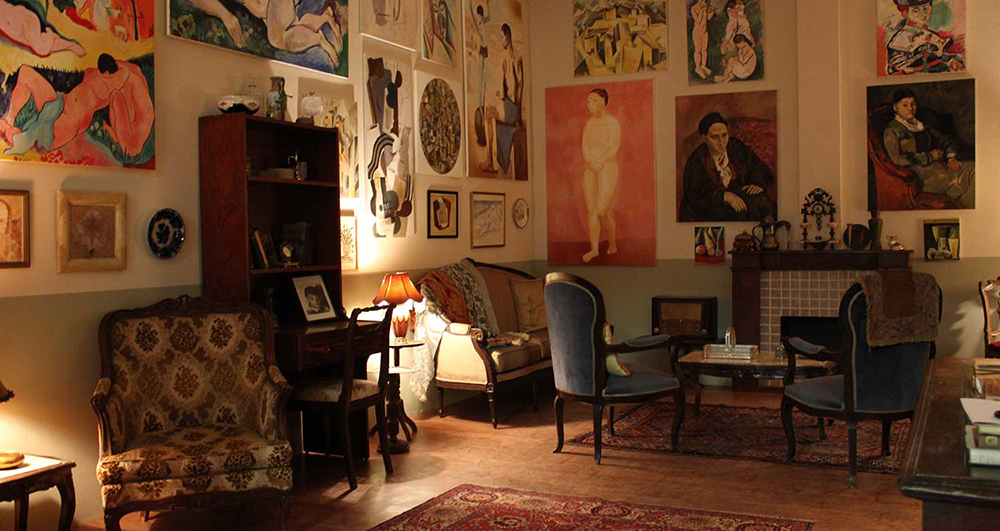 This event is part of the second chapter for Home Workspace Program 2013-14, led by resident professors Jalal Toufic and Anton Vidokle. For more information on Chapter 2 and the year’s schedule and curriculum, please see HWP 2013-14.

Salon de Fleurus is an educational institution dedicated to assembling, preserving, and exhibiting memories on early modern art. Its permanent exhibit, titled From The Autobiography of Alice B. Toklas, located at 41 Spring Street, New York, has been open to the public since 1992.

A selection from the Salon’s permanent collection was part of the Fiction Reconstructed that was shown in Ljubljana, Belgrade and Budapest from 2000 to 2002. In 2002, Salon de Fleurus was included in the Whitney Biennial, Sydney Biennial, and exhibition Am Anfang der Bevegung stand ein Skandal in the Lenbachhaus Munich. Selections from the Salon’s permanent collection were also shown at the exhibitions What is Modern Art? (Kunstlerhaus Bethanien, Berlin, 2006),The Making of Americans (James Gallery, CUNY Graduate Center, New York) and Les Fleurs Americaines (Le Plateau, Paris, 2012). That same year, an event titled A Salon de Fleurus Salon was organized at MoMA (New York). In 2011, the Metabolic Studio (Los Angeles) opened another version of the Salon de Fleurus, with a collection titled Portraits and Prayers that more closely resembles the early twentieth century Paris Salon. It is this collection that will be replicated at Ashkal Alwan in Beirut beginning of January 2014.

The exhibition will include guided tours and three public presentations. Please see below.

Guided tours with the caretaker of the Salon de Fleurus

The caretaker of the Salon de Fleurus will be giving guided tours on the following dates:

by reservation: every half hour from 5 to 7pm

by reservation: every half hour from 3 to 5pm

by reservation: every half hour from 5 to 7pm

The Making of Americans

The Stein collection was the earliest collection of modern art that exhibited works of Cezanne, Matisse, and Picasso together (1905). It influenced American collections of modern European art of the first half of the 20th century, the Arensberg Collection, Societe Anonyme, the Barnes Collection, the Cone Sisters Collection, etc. It is through these collections that modern art in America was being perceived and interpreted in a more avant-garde manner than in Europe itself.

Abstract Cabinet and the Modern Narrative

In 1929 the Museum of Modern Art opened in New York. In the beginning its collection was comprised of almost entirely European and avant-garde oriented works. Instead of "National Schools," its 1936 exhibition Cubism and Abstract Art introduced "International Movements" as a key notion for telling the story known as the History of Modern Art. This story represented the re-interpretation of modern art and was later adopted by Europeans and became the foundation of the art scene as we know it today.

During the 1950s, the Museum of Modern Art in New York organized a series of exhibitions of modern American art that traveled through many European cities. Those were the exhibitions that helped establish in Europe the postwar common cultural identity based on internationalism, modernism, and individualism. One such exhibition, Modern Art in the USA, was brought in 1956 to Belgrade, then the capital of Yugoslavia. This was the first time that works by Gorky, de Kooning, Pollock, Kline, Motherwell, Rothko, etc. were exhibited in a socialist country. This also happened to be the last exhibition where Pollock appeared as a living artist.