Two Suns: Screening and Conversation with Anton Vidokle at 98weeks 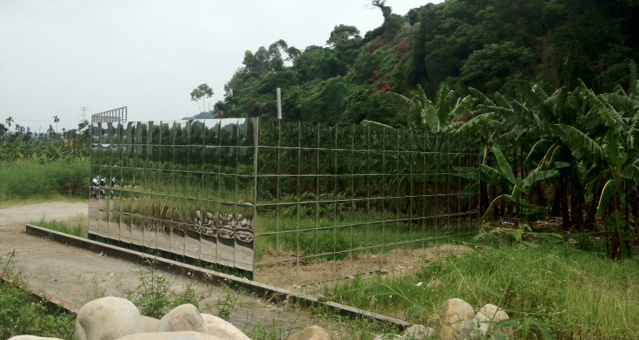 For more information on the second chapter and the year’s schedule and curriculum, please see HWP 2013-14.

Two Suns, a collaboration between artist Anton Vidokle and writer Hu Fang, is set in an abandoned house in the Taiwanese countryside, situated between a banana plantation and a highway. We watch the building slowly being clad by mirrors. In the process, the house gradually vanishes from sight, as it becomes a mirror, or rather, an image, of the surrounding environment. The Chinese-spoken sound­track is based on the text “A Col­lec­tion of Portraits” written by Hu Fang. The portrait as a genre is about creating an image; it is a mimetic mirror of a person, a self— and such a “self” is the very origin and vanishing point of any picture of the world, since the world must first be mirrored in our senses to appear. Hence, the film’s image and sound construct a dialectic relation between “portrait” and “mirror-building,” “landscape” and “person/self,” at times schizophrenic, at other times exchanging figure and ground, passive and active, ultimately dissolving into each other along this divide. The English subtitles of the work, finally, form a third, overarching narrative told in the first person by Anton Vidokle. This narrative inscribes the work into the context of architectural modernism by telling the story of Vidokle’s visit to the iconic Schröder-House designed by Gerrit Rietveld for his lover in the Dutch city of Utrecht. The first house considered to be “modernist,” Rietveld’s abode had no mirrors in it—because the mirror, in the architect’s view, created a space that was beyond the control of the architect. The site where normally a “self” meets its image in every house is at the same time the blind spot of planning—a space that escapes human control.