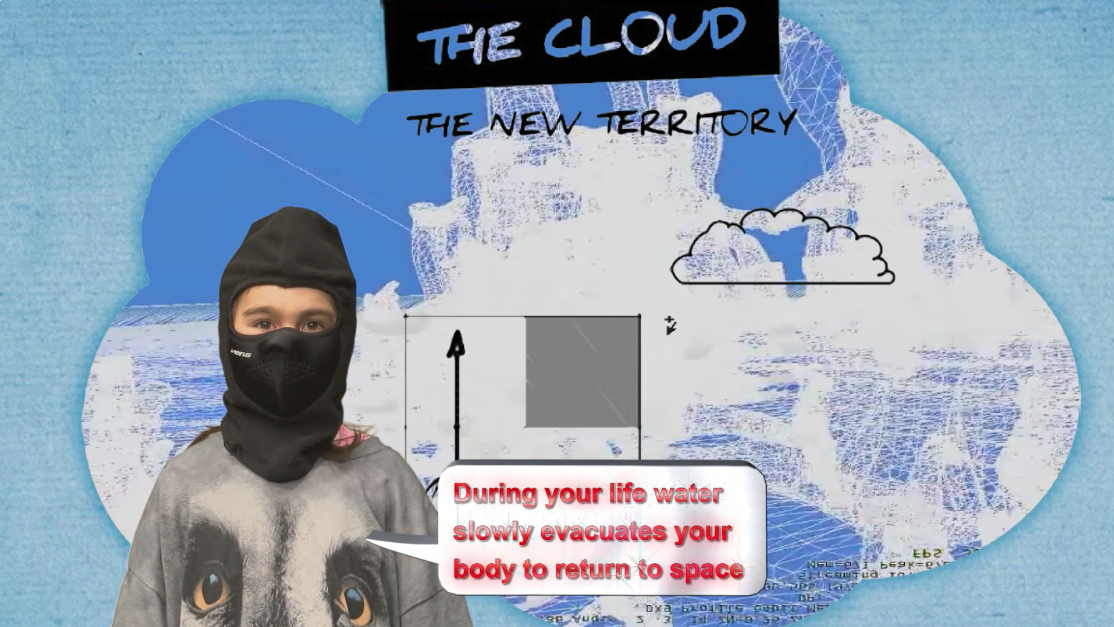 This event is part of the fourth chapter for Home Workspace Program 2013-14, led by resident professors Jalal Toufic and Anton Vidokle. For more information on Chapter 4 and the year’s schedule and curriculum, please see HWP 2013-14.

Imagine an exhibition that cannot be sustained. That is falling apart before installation has even begun. That flickers on and off to skype notification sounds. That consists of nothing but these sounds. Because the space cannot be occupied. Its time cannot be filled. Because time and space already collapsed into twisted pockets of detritus, hastily patched over by shutterstock images.

Junktime depends on velocity as in there isn’t any, sorry. It happens in the sudden transition from 9g to -4g; or from vertical sovereignity to the diagonal rule of gangs and trend forecast agencies. Somewhere in there time fractures and breaks into segments of uneven intensity. Huge hangars pop up in service sector neighborhoods featuring members of lower digital castes struggling but unable to piece it back together. Junktime is exhausted, interrupted, dulled by Ketamine, Lyrica, corporate imagery stuff. Junktime happens when information is not power, but lands as pain. Junktime doesn’t have side effects, sorry. It is a side effect. It might scan your attention span and spam you forever.

Junktime is what happens if the rug of time gets pulled out from under time based media. No sequences other then permanent jumpcuts, no duration just loops, all running to the rhythm of misfiring neurons and intercepted geolocation data.

Welcome to junktime. Already available at a server near you.

-8pm screening program 1 | Strike, How Not to Be Seen, Liquidity Inc.

-7pm screening program 2 | Is the Museum a Battlefield, Guards

-9pm screening program 3 | I Dreamed a Dream: Politics in the Age of Mass Art Production

- 7pm presentation of "Montage in Writing" with 98weeks & Hito Steyerl

- 8pm screening of UdK (Berlin University of the Arts) student films including:

How Not to Be Seen: A Fucking Didactic Educational .MOV File

How Not to Be Seen: A Fucking Didactic Educational .MOV File (2013) is an instructional film on the idea of becoming invisible in the digital world.

Images of enclosure fights and surfers, waves and continue take bizarre turns in Liquidity Inc’s 30 notation duration. The 1990s net-boom and dotcom bubble, a mercantile continue systems encircling a creation and travesty TV continue reports delivered by meteorologists in balaclavas (inspired by a 1970s belligerent leftwing organisation a Weather Underground) diffuse a action. The shade surges with electronically extended versions of Hokusai’s The Great Wave, and Paul Klee’s Angelus Novus flaps a wings in a dilemma of a screen, like an divergent charge warning. The storm, my friend, is history.

Is the Museum a Battlefield

Steyerl’s new lecture, produced for the 13th Istanbul Biennial, asks the question of how a museum and a battlefield could be related. The question emerges when Steyerl follows the trace of an empty bullet casing which she found in the area where the mass grave of Andrea Wolf and her friends were located in Van, Turkey.

Guards (2012) was shot on location at the Art Institute and features interviews with museum security personnel who have military backgrounds. Intermingled with new and found footage, the interviews explore the officers' experiences of protecting art and protecting the nation.

I Dreamed a Dream: Politics in the Age of Mass Art Production

“The performance deals with the age of mass art production and assumes the form of non-fiction subscription based novel. It is full of cliffhangers, advertisement breaks and excessive and incoherent plotlines. Also it will suddenly stop without further notice or warning.”

Journal Nr. 1 is the title of a Bosnian monthly newsreel from 1947 that was destroyed in the Bosnian war around 1994. The video installation Journal Nr. 1 - An artist’s impression (2007) reconstructs a scene from this newsreel on the alphabetisation of Muslim women. Two cinema employees related their memories of the scene, which was then interpreted by two illustrators. The result is two different images of one school class. But is the story of the film’s destruction true?

In Free Fall (2010) similarly takes on questions of continuous circulation as Steyerl uses the story of a particular Boeing 707 to analyze the social relations enmeshed in processes of production, consumption, destruction, and reuse.

Legend has it that Theodor W. Adorno had the auditorium where he taught at the Goethe-Universität in Frankfurt painted grey to aid concentration. In Adorno’s Grey, a team of conservators burrows into the wall of this auditorium hoping to reveal the layer of grey paint beneath it. A voiceover recounts an incident in 1969 when, after three female students approached and bore their breasts to him during a lecture, Adorno collected his papers and ran away in a panic. This would be his last lecture.

Steyerl’s acclaimed 2004 video essay November opens with Andrea’s role as a charismatic protagonist in an amateur film made by the two friends when they were in their teens. From a fictional badass feminist vigilante to a martyr for the Kurdish cause, the memory of a dear friend forms the axis of a meta-narrative on the persistent proximity, and even expansion, of political violence in spite of the distancing effects of images.

Lovely Andrea (2007) follows the artist’s quest to find a bondage photograph she posed for while in Tokyo as a film student. The film explores ideas of bondage and domination as they extend to self-identification, popular culture, and politics.

Abstract (2012) is a return to the contested narrative of Wolf’s death with the artist traveling to Kurdistan in search of information about her friend's murder. The work links cinematic shooting and military warfare together, implicating Germany’s role in the operation.

Hito Steyerl’s films and essays take the digital image as a point of departure for entering a world in which a politics of dazzle manifests as collective desire. This is to say that when war, genocide, capital flows, digital detritus, and class warfare always take place partially within images, we are no longer dealing with the virtual but with a confusing and possibly alien concreteness that we are only beginning to understand. Today the image world, Steyerl reminds us, is far from flat. And paradoxically it may be in its most trashy and hollowed out spots that we can locate its ethics. Because this is where forms run free and the altogether unseen and unrecognized toy with political projects at the speed of light. It is where spectacle and poverty merge, then split, then dance.