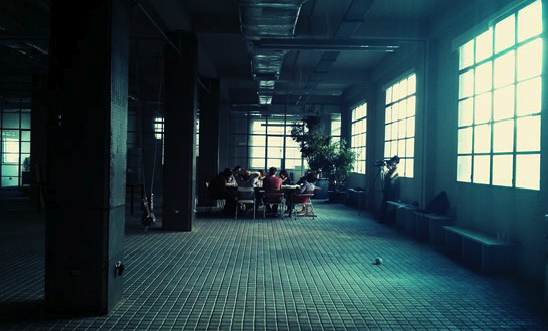 Joana Hadjithomas and Khalil Joreige explore their research focusing on artistic and cinematographic narration, the writing of history, the construction of imaginaries, as well as the notions of territory, cosmopolitanism and contemporaneity.

Joana Hadjithomas and Khalil Joreige are Lebanese filmmakers and artists that regularly collaborate. Together, they have directed documentaries such as Khiam 2000-2007 and El Film el Mafkoud (The Lost Film, 2003), and feature films such as Al Bayt el Zaher (Around the Pink House) in 1999 and A Perfect Day in 2005. Their feature film Je veux voir (I Want to See) premiered in the official selection of Cannes Film Festival in 2008 and was awarded Best Singular Film by the French Critics Syndicate. Together, they have created numerous photographic installations such as the Circle of Confusion, the Wonder Beirut project, Latent Images, Lasting Images, and Faces, among others. They have presented their work in museums, biennials and galleries around the world, most recently at the 10th Sharjah Biennial, the 11th Lyon Biennial, the 12th Istanbul Biennial, La Triennale (Paris), the Gwangju Biennial, Festival d’Avignon, Museé d’Art Moderne (Paris), Centre de la Photographie (Geneva), Ellen Bina Gallery (Montréal), Beirut Exhibition Center, Guggenheim Museum (New York), and Victoria and Albert Museum (London). Their last body of work is a feature documentary and an art project on the Lebanese space program, titled The Lebanese Rocket Society: The Strange Tale of the Lebanese Space Race.

Hadjithomas and Joreige are film and art professors in Lebanon and in France. Together with Georges Schoucair, they are co-founders of Abbout Productions, and are members of the Metropolis Art Cinema committee (Beirut).