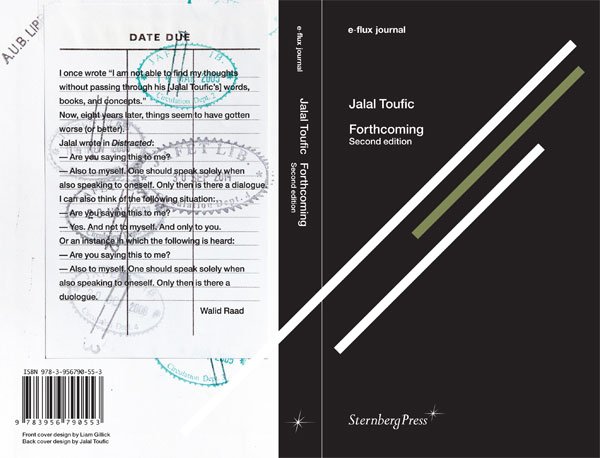 Ashkal Alwan is happy to invite you to the Beirut launch of the second edition of Jalal Toufic's Forthcoming, followed at 8:30 pm by the keynote lecture “Creating and Dispersing Universes Again and Again” by the author, presented as part of the closing events for Chapter 5 of HWP 2013-14 and introduced by Anton Vidokle.

"Jalal Toufic is a thinker whose influence in the Beirut artistic community over the past two decades has been immense—notwithstanding that, as he put it, many, if not all of his books, most of which were published by Forthcoming Books, 'continue to be forthcoming even after their publication.' In relation to one of these books, he wondered: 'Does not a book titled Forthcoming suggest, ostensibly paradoxically, a second edition?' Here’s the revised edition of Forthcoming, a book first published nearly a decade and a half ago by Atelos press."

"I once wrote, 'I am not able to find my thoughts without passing through his words, books, and concepts.' Now, eight years later, things seem to have gotten worse (or better).

— Also to myself. One should speak solely when also speaking to oneself. Only then is there a dialogue.

I can also think of the following situation:

Or an instance in which the following is heard:

— Also to myself. One should speak solely when also speaking to oneself. Only then is there a duologue."