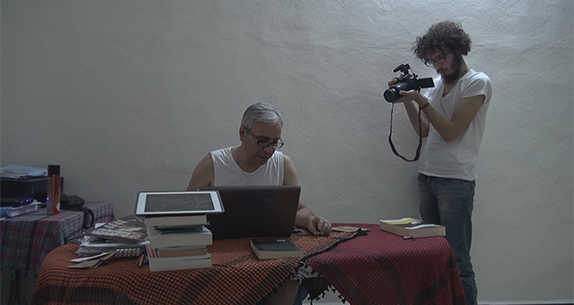 After 16 years in prison for belonging to the Syrian left, Yassin (53) joins Syria’s popular uprising in 2011. Ziad (24), occasionally fighting with the rebels, takes photographs of his hometown Douma. The two men meet and become friends in this Damascene suburb where Yassin and his wife Samira had found shelter.

Together, they embark on an adventurous journey through the desert to al-Haj Saleh’s native town Raqqa in Northeast Syria, now occupied by the “Islamic State in Iraq and Levant” (ISIS), which also kidnapped two of Yassin’s brothers.

Consequently, the writer moves to Istanbul to continue working for the rebels and is joined by Ziad following his release from ISIS. They are both hopeful that they will return and be reunited with their families. However, the situation becomes hopeless when Samira and human rights lawyer Razan Zeitouneh are kidnapped.

And the film ends while Syria tumbles into a yawning abyss.

Mohammad Ali Atassi is a journalist and documentary filmmaker. He was born in 1967 in Damascus, Syria. Atassi obtained a diploma in civil engineering from Damascus University in 1992 and a DEA in history from the Sorbonne Paris 4 in 1996. Since 2000, he has been writing for several Arab and international newspapers on political and cultural topics. In 2001, he did a documentary film on the Syrian dissident Riad Turk elaborating the latter’s prison experience of 18 years in Syrian prisons while Atassi explored Turk’s positions on the Syrian revolution in a second documentary movie in 2012 called “Ibn Al Am online”. Moreover, he realized “Waiting for Abu Zaid” portraying the famous Egyptian Nasr Hamid Abu Zaid who was a pioneer of reformist ideas on Islam until his death in 2010. Atassi’s films have been shown in several festivals worldwide and has gained several awards for his work.

Ziad Homsi was born in 1989 in Damascus/Syria and has studied Business Administration, his passion however being always photography. Thus, with the beginning of the Syrian Revolution in March 2011, he has become one of the most important photographers in his hometown, which is the suburb of Douma and is known to be one of the centers of the uprising. His pictures have been shown in various exhibitions in Europe, among others in Copenhagen, Paris, Amsterdam and Berlin. In 2012, he has also realized a short documentary on the security crackdown and massacres that was inflicted on the residents of the city of Douma by the Syrian security forces.

1. Oh Douma (2012) – Short documentary on the security crackdown and massacres that was inflicted on the residents of the city of Douma by the Syrian security forces