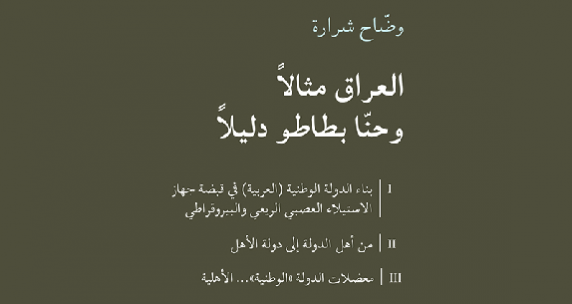 At Ashkal Alwan’s booth (B55) at The Beirut International Arab Book Fair, BIEL.

This book is a critical review of The Old Social Classes and the Revolutionary Movements of Iraq (1978) by Palestinian writer Hanna Batatu (1926 – 2000). The book comes as a response to social and general developments in the Arab world from the beginning of the 21st century onwards. Iraq, in the mirror of the late historian Batatu, is a point of departure and a case study for transformations in the conceived notions of state and society.

Waddah Charara is a Lebanese writer, journalist, translator and professor of sociology. He was engaged in political party and syndicate activism, then cut short his activities just prior to the outbreak of Lebanese wars and devoted his time to writing. He has written on diverse subjects from Lebanese political and social issues, to Islamic political movements, to literature, poetry and cinema. His published works include As-Səlm al-Ahli Al-Bārəd: Lubnān l-Mujtama‘ wad-Dawla 1964-67 (The Cold Civil Peace: The 1964-67 Social and State Lebanon), 1980; Dawlat Ḥizbullāh: Lubnān Mujtama‘an Islāmīyyan (The Hizbollah State: Lebanon as Islamic Society), 1996; Ahwā’ Beyrūt wa Mesāriḥuhā (Loves and Scenes of Beirut), 2008; the collection Tašrīq wa Taġrīb (The Go East and Go West), 1989, and the recent book Tarjamat An-Nisa’ (Translating Women), 2014. He has translated into Arabic works of authors such as Anna Akhmatova, Paul Celan, Michel Tardieu and Antonio Gramsci among others.