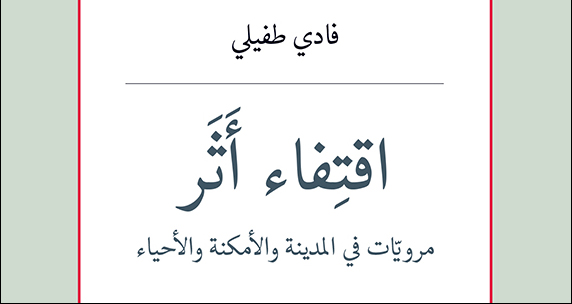 (In Pursuit of a Trace): Narratives About the City, Places and Habita(n)ts

A book by Fadi Tofeili

At Ashkal Alwan’s booth (B55) at The Beirut International Arab Book Fair, BIEL.

Ashkal Alwan is pleased to invite you to the launch and signing of the new book ʼəqtifāʼ ʼather (In Pursuit of a Trace): Narratives About the City, Places and Habita(n)ts, by writer Fadi Tofeili.

Stories that start in 1981 and end in 2008. The events in these stories take place in several quarters and neighbourhoods of Beirut, fusing with densely correlated, interactive human and spatial elements, and transforming the narrative into sociological and analytical fiction writing.

Fadi Tofeili is a Lebanese writer, poet, and translator. He is a co-founder and the editor-in-chief of Portal 9: stories and critical writing about the city. His writings have been published since the early 90’s in various Lebanese newspapers and publications. He has published three books of poetry. Tofeili has translated many literal and mythological works into Arabic, including: The Myths of the Cherokees by James Mooney, and Shame in the Blood by Tetsuo Miura.