The loudest muttering is over: Workshop Led by Resident Professor Walid Raad 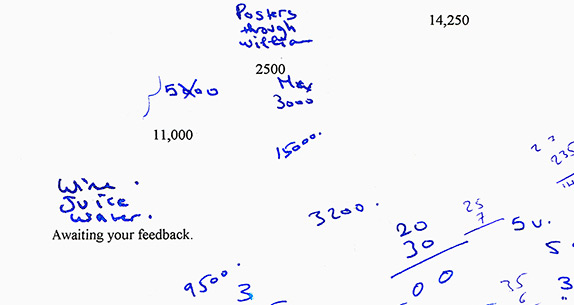 For the past seven years, Walid Raad has been working on an art project titled Scratching on things I could disavow which proceeds from the recent emergence of new infrastructures for the arts in the MENASA region, with particular emphasis on recent developments in Lebanon, UAE and Qatar. Raad’s project engages the concepts, gestures, and forms made possible by these infrastructures as well as their ideological, economic, historical, and political frames. Raad’s workshop will parallel his own ongoing inquiry and interests and as such will include lectures, presentations, and interviews with the artists, writers, theorists, historians, activists and others who continue to inform his project.

The loudest muttering is over is Workshop II of HWP 2014-15: Setups / Situations / Institutions.

The lecture is open to the public. Registration for the workshops is now closed due to limited capacity.

8 – 10 pm | public: The Political Sociology of a Louvre in Abu Dhabi

Walid Raad is an artist and an Associate Professor of Art in The Cooper Union (New York, USA). Raad’s works include The Atlas Group (1989-2004), a fifteen-year project between 1989 and 2004 about the contemporary history of Lebanon, and the ongoing projects Scratching on Things I Could Disavow and Sweet Talk: Commissions (Beirut). His books include The Truth Will Be Known When The Last Witness Is Dead, My Neck Is Thinner Than A Hair, Let’s Be Honest, The Weather Helped, and Scratching on Things I Could Disavow. Raad’s works have been shown in Documenta 11 and 13 (Kassel), Musée du Louvre (Paris), Kunsthalle Zurich (Zurich), The Whitechapel Art Gallery (London), Festival d’Automne (Paris), Kunstenfestivaldesarts (Brussels), The Hamburger Bahnhof (Berlin), Home Works Forum (Beirut) and numerous other museums and venues in Europe, the Middle East, and the Americas. Raad is also the recipient of the Hasselblad Award (2011), a Guggenheim Fellowship (2009), the Alpert Award in Visual Arts (2007), the Deutsche Börse Photography Prize (2007), and the Camera Austria Award (2005).

Alexandre Kazerouni is a French political scientist trained in Paris at Sciences Po, the Institute of Political Studies of Paris, where he is currently teaching and conducting research activities, after a postdoc at Stanford University. He is a Research Associate at CERI, Sciences Po’s center devoted to international studies and research. He defended his doctoral thesis on museums in the Arab principalities of the Persian Gulf in November 2013. Entitled The Mirror of the Sheikhs, it will be published at Presses Universitaires de France in 2015.

Maria Lind is a curator and critic based in Stockholm, where she was born in 1966. She is the director of Tensta Konsthall, Stockholm. She was director of the graduate program at the Center for Curatorial Studies, Bard College (2008-2010), and of Iaspis in Stockholm (2005-2007); director of Kunstverein München (2002-2004). From 1997-2001 she was curator at Moderna Museet in Stockholm and, in 1998, co-curator of Manifesta 2. Responsible for Moderna Museet Projekt, Lind worked with artists on a series of 29 commissions that took place in a temporary project-space, or within or beyond the Museum in Stockholm. There she also curated What if: Art on the Verge of Architecture and Design. In 2011 she guest-curated the group exhibition Abstract Possible: The Tamayo Take at Museo Tamayo in Mexico City. She has contributed widely to newspapers and magazines and to numerous catalogues and other publications. She is co-editor of the books Curating with Light Luggage, Collected Newsletter (Revolver Archiv für aktuelle Kunst), Taking the Matter into Common Hands: Collaborative Practices in Contemporary Art (Blackdog Publishing), as well as the reports European Cultural Policies 2015 (Iaspis and eipcp) and The Greenroom: Reconsidering the Documentary and Contemporary Art (Sternberg Press). Among her recent co-edited publications are Contemporary Art and Its Commercial Markets: A Report on Current Conditions and Future Scenarios, Performing the Curatorial: With and Beyond Art, and Art and the F Word: Reflections on the Browning of Europe, all at Sternberg Press. She edited Abstraction as part of MIT’s and Whitechapel Gallery’s series Documents on Contemporary Art. She is the 2009 recipient of the Walter Hopps Award for Curatorial Achievement. In the fall of 2010 Selected Maria Lind Writing was published by Sternberg Press.

Eungie Joo was Keith Haring Director and Curator of Education and Public Programs at the New Museum from 2007-2012, where she spearheaded the Museum as Hub program and was curator of the "2012 New Museum Triennial: The Ungovernables." She was founding Director and Curator of the Gallery at REDCAT, Los Angeles (2003-2007), and served as commissioner of the Korean Pavilion at the 53rd Venice Biennale in 2009, with "Condensation: Haegue Yang." Joo received her doctorate in Ethnic Studies at the University of California at Berkeley. She is currently curator of "Sharjah Biennial 12: The past, the present, the possible,” on view 5 March - 5 June 2015.

Andrea Salvini is the Chief Technical Advisor, Migration and Governance Network at the ILO Regional Office for the Arab States in Beirut, Lebanon. Previous experiences as a Research Associate at the University of Sydney, Labour Economist at the ILO Office for Viet Nam, specializing in labour issues and political economy and as a Technical Expert on Employment and Labour Market Policies from 2005 to 2010 at the ILO Sub regional Office for Central and Eastern Europe in Budapest, acquiring expertise on labour and development in transition countries through the implementation of seven development cooperation projects. In addition to these achievements, Mr. Salvini has collaborated with the London School of Economics and with the Joint Research Centre of the European Commission in 2005 on the evaluation of the European Structural Funds, and worked for the OECD in 2002-2003 on the Social Aspects of Sustainable Development. Salvini holds a MSc in Economics from the Department of Economics of University College, London.