4 thoughts among others: Led by Resident Professor Kader Attia 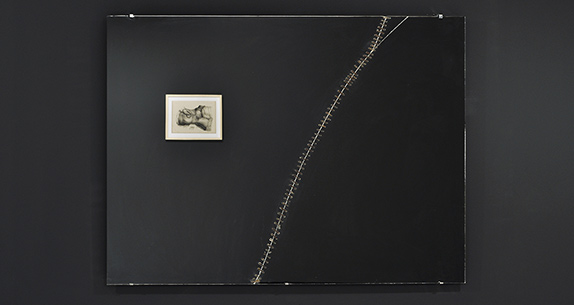 Kader Attia’s last publication RepaiR will serve as the canvas for this workshop, in which he will explore together with participants different thoughts on four fields he developed in his multi-thought project. As an artist, Attia always finds fascinating how things that are not Art can lead to Art. Textual or visual archives have this heavy absolutism, which has to become a beyond and/or a before Art. The aim is not to teach Art, but to share unexpected experiences, souvenirs, encounters, observations, imaginations and intuitions which one day could suggest a starting point for Art.

4 thoughts among others includes four subtitles:

- Architecture, a body on both sides of the skin (or in and out of the skin)

- From the political to the intimate, music as sexual revolution

4 thoughts among others is Workshop III of HWP 2014-15: Setups / Situations / Institutions.

8 – 9:30 pm | public: lecture by Jacinto Lageira: History to do what? / Contribution to a Cosmopolitic Æsthetics

8 – 9:30 pm | public: lecture by Léa Gauthier: Bodies of repair: How the body is the complex stage of Repair?

Kader Attia (b. 1970) spent his childhood between France and Algeria, and studied philosophy and fine arts in Paris and Barcelona. He lives and works in Berlin and Algiers.His research in recent years has focused on the notion of repair as constancy of human nature, which the Western modern mind and the non-Western mind have always conceived oppositely. Recent exhibitions include ‘Contre Nature’, a solo show at the Beirut Art Center, ‘Continuum of Repair: The Light of Jacob’s Ladder’, a solo show at Whitechapel Gallery, London, ‘Repair. 5 Acts’, a solo show at KW Institute for Contemporary Art, Berlin, ‘Construire, Déconstruire, Reconstruire: Le Corps Utopique’, a solo show at Musée d’Art Moderne de la Ville de Paris, the Biennale of Dakar, dOCUMENTA(13) in Kassel, ‘Performing Histories (1)’ at MoMA, New York, and ‘Contested Terrains’, Tate Modern, London.

Françoise Vergès is currently holding the Chair “Global South(s)” at the Collège d’études mondiales, Paris. She also works for the Memorial of the Abolition of Slavery in Nantes. Vergès grew up in Reunion Island, and has lived in Algeria, France, Mexico, the United States, and England. In the 1970s-1980s, she was a journalist in a feminist weekly, an editor in a feminist publishing house, and worked in anti-racist and anti-imperialist movements. She moved to the USA in 1983 and got her BA summa cum laude in Women’s Studies and Political Science at UCSD and her Ph.D. in Political Theory at the University of Berkeley (1995). Françoise Vergès has directed the scientific and cultural program for a museum in Reunion Island (2002-2010) and has been the president of the French Committee for the Memory and History of Slavery (2009-2012). She has written extensively on memories of colonial slavery and colonialism, on Aimé Césaire and Frantz Fanon, on museums, and on the processes of creolization. Her most recent publications include “A Sound Like A Rumor” in Kader Attia. RepaiR (2014); and Les armes miraculeuses (2014). Vergès works with filmmakers and artists and is also the author of several documentaries. As an independent curator, she organized the program “The Slave in Le Louvre” for the 2012 Paris Triennial, curated exhibitions for the Memorial of the Abolition of Slavery in Nantes, and presented the performance Bitter Sugar at Palais de Tokyo in June 2014.

Léa Gauthier is a philosopher, art critic, and professor of Art Theory at the Royal Academy of Fine Arts in Brussels. She is the founder and publisher of Blackjack éditions (Paris) which published Kader Attia's book RepaiR among other publications.

Ana Teixeira Pinto is a writer from Lisbon, living in Berlin. She is currently a lecturer at the UdK (Universität der Künste) Berlin and contributes regularly to publications such as e-flux Journal, Art-Agenda, Mousse, Frieze/de, Domus, Inaesthetics, The Manifesta Journal, or Text zur Kunst.

Doreen Mende is an independent curator and scholar, currently living in Berlin. Her concept-driven projects often involve research into the vocabularies of image archives in relation to economics, display practices, anti-colonial thinking, non-aligned trajectories, the paradoxical forms of socialist internationalisms, solidarity and geopolitics in contemporary exhibiting processes. Recent curatorial work include the research-collaborative project and publication Double Bound Economies (2011–13) with Halle14 in Leipzig, ETH in Zurich, centre de la photographie in Genèva, Thomas Fischer gallery in Berlin; the trans-disciplinary conference On Violence (2014) for Limerick Biennale EVA International 2014 in Dublin; the international research-collaborative project Travelling Communiqué (2013–14) with Netsa Art Village in Addis Ababa and Dutch Art Institute for the House of the World Cultures in Berlin and the Museum of Yugoslav History in Belgrade; the exhibition and publication KP Brehmer Real Capital ¬– Production (2014) for Raven Row in London; and the session A Triple Timeline (2014) for Qalandyia International Encounters 2014, Ramallah. She is co-founder and was editor-in-chief (2006–09) of the publication series Displayer of the University of Arts and Design / ZKM Karlsruhe. Most recent academic affiliations include CCS Bard College in Annandale-on-Hudson, New York and the Academy of Visual Arts in Leipzig. Since 2010, she is faculty member of the Dutch Art Institute. In 2011, she was awarded with the research fellowship of the Arab Image Foundation in Beirut, which contributed to her practice-based PhD in Curatorial/Knowledge at Goldsmiths, University of London, concluded in 2014.