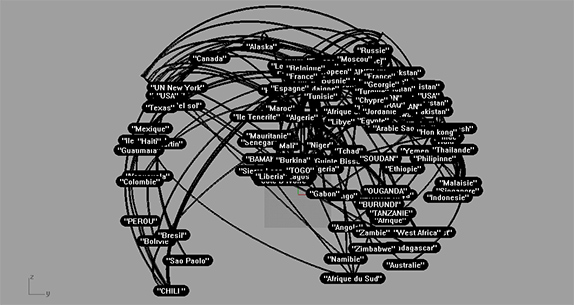 Facing certain situations, to what modes of inquiry, practices of art, but also tools and methods of sciences can we refer today? Considering their research on the construction of imaginaries and the writing of history, Joreige and Hadjithomas will work jointly with Bruno Latour and his methodologies, with members or former participants of SPEAP (the Masters program of Experimentation in Art and Politics, Sciences Po, Paris) Valérie Pihet and Sandra Terdjman, with actors in the Lebanese scene Waddah Charara and Tarek Atoui, and with participants. Presentations and workshops shall focus on the shareable public space, on the common, and on the invention of new forms of political, scientific and artistic representations.

Inquiries on a Common World is Workshop IV of HWP 2014-15: Setups / Situations / Institutions.

Lectures are open to the public.

It has become clear that we no longer live in a shared world. The common world remains an horizon but it has to be composed out of vastly disjointed experiences and values. The lecture will review some experiment in composing the common world coming from several fields of science, art and education.

The people(s) of the balcony

This lecture and conversation is a descriptive study of Beirut’s Manara corniche or seafront promenade, as a society consisting of overlapping and adjacent groups, and a stage on which these groups exhibit their ‘manners,’ form their relations, and inhabit their domains.

Through the description, the lecture aims to deduce a general or common trait that can help define the implicit contract on the basis of which these groups and individuals have convened.

*In Arabic with simultaneous interpretation into English.

*In Arabic with simultaneous interpretation into English.

The composition WITHIN and the inquiry TACET are two intertwined projects initiated in 2013 in the context of the Sharjah Biennial 11. They started as a dialogue between Tarek Atoui, Council (curators Sandra Terdjman and Gregory Castera) and the teachers and students of Al Amal School for the Deaf in Sharjah.

These discussions took place with students of different degrees of deafness, and led to an exploration of a diversity of listening modes and abilities (anticipation, tactile sound, visual noise). During the biennial, this informed the structure of Tarek Atoui's composition,  as well as a number of workshops with Al Amal students and a think tank curated by Council with a collective of researchers.

Since 2013, they also inspired new productions and an online publication.

Through WITHIN and TACET, different modes of inquiries were experimented. This talk will look back at the different methodologies used and their consequences.

With the support of the Institut Français, Beirut.

They are university lecturers and are cofounders of the production company Abbout Productions and on the executive board of Metropolis art Cinema in Beirut.

Valérie Pihet co-founded with the French philosopher Bruno Latour the experimental Masters program in arts and politics (SPEAP) in Sciences Po Paris. She was the executive director of SPEAP for 4 years.  Since 2002, Valérie Pihet has collaborated with Bruno Latour on a number of other projects : she was in charge of coordinating the Iconoclash. Beyond the image wars in science, religion and art (ZKM, 2002) and Making Things Public. Atmospheres of Democracy (ZKM, 2005) exhibits, and creating and developing the Sciences Po médialab, a digital resources laboratory. She has also worked with numerous artists (Pierre Huyghe, Armin Linke, etc.) as well as with researchers. She is the president of the Dingdingdong institute of co-production of knowledge on Huntington’s disease, co-founded with Emilie Hermant in 2012 (dingdingdong.org).

Bruno Latour teaches at Sciences Po Paris and is the director of the medialab as well as of the experimental Masters program in arts and politics (SPEAP). He has written extensively on science and society and most of his papers are accessible on line on www.bruno-latour.fr

Sandra Terdjman is a curator. In 2013, she co-founded Council, an agency that explores the modes of composition of arts, sciences and civil society, to propose new representations of contemporary social challenges. She is also the founding director of Kadist Art Foundation – a private foundation based in Paris and San Francisco, dedicated to supporting contemporary art.

Waddah Charara is a Lebanese writer, journalist, translator and professor of sociology. He was engaged in political party and syndicate activism, then cut short his activities just prior to the outbreak of the Lebanese wars and devoted his time to writing. He has written on diverse subjects from Lebanese political and social issues, to Islamic political movements, to literature, poetry and cinema. His published works include As-Səlm al-Ahli Al-Bārəd: Lubnān l-Mujtama‘ wad-Dawla 1964-67 (The Cold Civil Peace: The 1964-67 Social and State Lebanon), 1980; Dawlat Ḥizbullāh: Lubnān Mujtama‘an Islāmīyyan (The Hizbollah State: Lebanon as Islamic Society), 1996; Ahwā’ Beyrūt wa Mesāriḥuhā (Loves and Scenes of Beirut), 2008; the collection Tašrīq wa Taġrīb (The Go East and Go West), 1989; and the recent books Tarjamat An-Nisa’ (Translating Women), 2014 and al-ʻIrāq mithālan wa Ḥannā Baṭāṭū dalīlan (Iraq as Case Study and Hanna Batatu as Mentor), 2014. He has translated into Arabic works of authors such as Anna Akhmatova, Paul Celan, Michel Tardieu and Antonio Gramsci among others.

Born in Lebanon in 1980, Tarek Atoui moved to France in 1998 to study sound art and electro-acoustic music at the Conservatoire national de Reims in France. He has served as artistic co-director of the STEIM Studios in Amsterdam, a center for the research and development of new electronic musical instruments. Atoui has presented work in international venues and participated in exhibitions including the Sharjah Biennial, Sharjah, UAE (2009 and 2013); the New Museum of Contemporary Art, New York (2010); La Maison Rouge, Paris (2010); the Mediacity Biennial, Seoul (2010); the Haus Der Kunst, Munich (2010); Performa 11, New York (2011); dOCUMENTA 13 (2012) and the 8th Berlin Biennial (2014). Tarek Atoui currently lives and works in Paris, France.