The World and the Movement of Images: Led by Resident Professor Ghassan Salhab 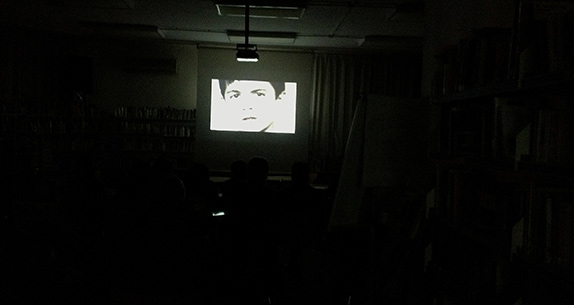 More than ever, we are faced with the question of the image. What are these images that we produce, that we invoke, that we watch, and that are watching us? We are at once the creators, the producers, the actors, the witnesses, and the audience of this spectacle. What is, then, this movement of the images that never ceases to haunt the world? What is, then, this gesture? What is it capable of, as with Spinoza who wished to know what a body is capable of. Questions, or rather inquiries, which we will attempt to raise again and again by way of workshops, seminars, and talks. Saad Chakali, Walid Sadek and Tariq Teguia will accompany us, on account of their different views and work approaches.

The World and the Movement of Images is Workshop I of HWP 2015-16: From The Miraculous to the Mundane.

Seminars and workshops have limited capacity and require registration.

Please register separately for each program by sending an email to hwp@ashkalalwan.org.

That the Image is an encounter - Seminar with Walid Sadek

Rather than a semiological approach to the image as text, as an encoded code to be decoded, as a sign to be read and consumed or as representation, this seminar proposes the Image as an encounter with appearance, with apparition and with formlessness.

The seminar begins with an extrapolative reassessment of the ontological claims of analog photography and the Byzantine iconological theory of likeness as theorized or rather theologized by Patriarch Nikephoros (c. 758 – 828) and then opens unto a series of theses on the Image as encounter and therefore as that which exceeds or eludes the control, intentions and purviews of the seeing-subject and/or maker-subject.

The seminar will delve into such questions as: Can the image exist if irreferential? What is the optical unconscious and what is optical truth? How can the Image be distinguished from the allegedly un-representable? And how can the image restore our fidelity to the world?

Representation, critique, political modernism: One take on art in Lebanon - Seminar and discussion with Ghalya Saadawi

This short seminar will explore some questions and theoretical considerations around witnessing and representation as they relate to art in the aftermath of a violent Lebanese civil war, and its insidious continuation in the post-Taef years. It will emphasize how a form of critique was enabled – at least early on – through tactics that we argue belong to waves of political modernism. This will help us rethink terminologies and ways of historicizing that had become part of a common, yet sometimes imprecise vocabulary, and the consequences of this on the present and future.

For many years, Mohamed Doaybess worked as assistant director and production manager for a large number of Lebanese filmmakers. In winter 2000, he left his home in the southern suburbs of Beirut and never came back. After several months of disappearance, his body was found in a deserted war-torn building. Reasons are still unknown. The film depicts Mohamed’s experience and his tragic death.

A Godardian montage of archives: A practice of emancipatory an-archism? - Seminar with Saad Chakali

We will explore how there is no existing image outside the montage of various documents; how there is no montage unless these documents that are to be compared, are set alongside each other and revealed (since the image will come during the time of resurrection) on the basis of their archival heterogeneity (newsreels and classic film excerpts; shots filmed by the filmmaker and other pictorial citations; literary and photographic excerpts; television reportage and graphic interventions by the filmmaker). Thus, there is montage and therefore image based on the following three principles: an aesthetic premise (the archives or the cited documents that are being compared are equal); an ethical imperative (one is free to place any archival document next to any other); and a political necessity (a fraternity among metaphors exists when what is missing is an archival document can be replaced by the one paired with it). Then, and only then, can the archive be understood in its inverse or negative form, through that which is faulty or missing within it (the ‘anarchive’, as Jacques Derrida would have called it). Thus, it is held by a perpetual repetition or ‘beginning’, from the moment it is dissociated or deactivated from all commandment or authority (the divided arkhè is the very an-archiste aspect of the artist).

A Godardian montage of archives: A practice of emancipatory an-archism? - Talk with Saad Chakali

Nothing is clearer than a territory, nothing more fixed, yet alterable and undefined all at once. Any territory, interior or exterior, is a kind of flux, otherwise it ceases to exist. How can one comprehend this movement and its ‘disappearance’. How does one capture this in-between-ness; the in-between of two worlds? In its borders, its expansions, its contractions, the city Beirut – in its very cliché – is this in-between-ness, between-two-worlds. Does the territory where Ashkal Alwan finds itself – this neither in nor out of the city, neither in the metropolis nor in its suburbs— sketch a field of the possible?

While covering community clashes in southern Algeria, Ibn Battuta, a journalist, finds himself picking up the trail of forgotten uprisings against the Abbasid Caliphate. For the purposes of his investigation, he goes to Beirut, allegedly to study the state of the ‘Arab nation’. Nahla, a young Palestinian whose family has found refuge in Greece, also heads for Beirut with funds for other Palestinians. In US-occupied Iraq, Mr. Prince is making easy money and, seeking to preserve his loot, he too moves to Beirut. These three will meet, despite tensions, missteps, dead ends, lies, oversights and ever-present ghosts.

Ghassan Salhab was born in Dakar, Senegal. In addition to making his own films and video works, Ghassan Salhab collaborates on various scenarios in Lebanon and in France, and teaches film in Lebanon. He has directed six feature films: Beyrouth Fantôme (1998); Terra Incognita (2002); The Last Man (2006); 1958 (2009); The Mountain (2011); and recently The Valley (2014). All films have been selected in various international film festivals — in addition to numerous short films and “videos”, including Everybody know this is nowhere – diptych; Le massacre des innocents – triptych; (Posthume); Narcisse Perdu; My living body, my dead body; La Rose de personne; Baalbeck (co-directed with A. Zaatari and M. Soueid); De la séduction (co-directed with N. Khodr); Afrique Fantôme; Après la Mort; among others. In 2010, a tribute to Salhab’s films was organized by La Rochelle International Film Festival and JC Carthage. Salhab has also published texts and articles in various magazines, and the book Fragments du Livre du Naufrage (Beirut: Amers Editions, 2012).

Walid Sadek is an artist and writer living in Beirut. His early work investigates the familial legacies of the Lebanese civil war. He later began to posit, mostly in theoretical texts, ways of understanding the complexity of lingering civil strife in times of relative social and economic stability. His later written work endeavors to structure a theory for a post-war society disinclined to resume normative living. More recently, his artworks and written texts begin to propose a poetics for a sociality governed by the logic of a protracted civil war and search for a critical temporality to challenge that same protractedness. He is associate professor in the department of Fine Arts and Art History at the American University of Beirut.

Ghalya Saadawi is an independent writer and academic living in Beirut. She lectures at the fine arts and art history department of the American University of Beirut and at the University of St. Joseph, where she teaches courses in modern and contemporary art theory, and Lebanese post-war art. Her essays and reviews have appeared in numerous publications, artists’ monographs and edited volumes. She holds a PhD from Goldsmiths, University of London titled Rethinking the Witness: Art After the Lebanese Wars (2015) and is currently artistic director of Ashkal Alwan’s Home Workspace Program.

Mohamed Soueid (b. 1959, Beirut) is a filmmaker, producer, author and scriptwriter. He began his career in film criticism as columnist for the Lebanese daily As-Safir and for the weekly cultural supplement of An Nahar newspaper. He worked in film projects as assistant director before realising his own documentaries and television projects. His feature documentaries include My Heart Beats Only for Her (2008), How Bitter My Sweet (2009), and the autobiographical trilogy Tango of Yearning (1998), Nightfall (2000) and Civil War (2002). He is also the author of two books on Lebanese cinema during the civil war (1986) and old movies theatres in Beirut (1996), as well as a novel titled "Cabaret Souad" (2004).

Saad Chakali is lecturer in conservation, patrimony and libraries in Paris. He writes regularly for online and print publications such as objectif-cinema, cadrage.net, Vertigo, Image documentaires, Trafic, 24 images, and Mondes du cinéma. He co-edits the web-based De nouvelles du front cinématographique. After collaborating on a book about Marc Scialom, intervening into two of Marie-José Mondzain’s philosophy seminars at the Ateliers Varan, as well as taking part in a seminar on Jean-Luc Godard at the Collège International de philosophie with Zsuzsa Baross, he is now a regular contributor to the Rencontres Internationales des Cinémas arabes in Marseille, and the Rencontres Cinématographiques de Béjaïa in Algeria. He is completing a book on the use of archives in the cinema of Jean-Luc Godard.

Tariq Teguia was born in Algiers in 1966. After studying philosophy and fine art, Tariq Teguia worked as a photographer for an Alegrian daily journal as well as a photographer's assistant and teacher at the School of Fine Art in Algiers. Later, he began making short films. Rome Rather Than You is his first long feature film. The film was presented at the Venice Festival in 2007, Belfort Festival 2007 (won Jury's Great Price and interpretation price for Samira Kaddour) and Fribourg Festival 2007 (won Jury's Special price). Inland (2008) and was presented in the competition in the Venice Festival 2008. In 2013, Teguia made Zanj Revolution, a film that questions the Algerian revolution.