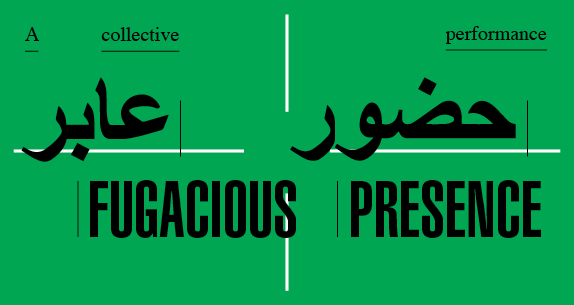 “Many are the terrible wonders , but none rises up more terrible than man.”

Ilse Frech is presently exploring the theme of war and memory related to Lebanon’s history and the carriers of its trauma - embodied by objects, the city as part of the landscape, and the human body as such. Fugacious Presence is a live-poem in the form an audiovisual composition being written at the very moment. The performing group acts as a collective body in a rhythmic concatenation of images, words, and sound, in joint alliance or opposition to one another. A vivid image of memory in transition emerges, yet awaiting to capture and grasp a voice or a body to be expressed in the present. Memory is as much a filmic montage as chance is a perpetual poem of the rise and collision of a projected presence and a possible future.

Ilse Frech (1972, Amsterdam) is a visual artist, documentary photographer and filmmaker. She studied Photography from 1990-94 at the Royal Academy for Fine Arts, Architecture and Music in The Hague (KABK). In 2013 she earned a Master’s degree from the University of Art and Design, HEAD-Geneva (Switzerland) in Fine Arts and Contemporary Artistic Practices, major Visual Arts – program Work.Master (2011-13). Identity related to political heritage, myth, memory and trauma embody her practice since 1999. Her residency at Ashkal Alwan is in affiliation with and supported by the Mondriaan Foundation, the Netherlands.