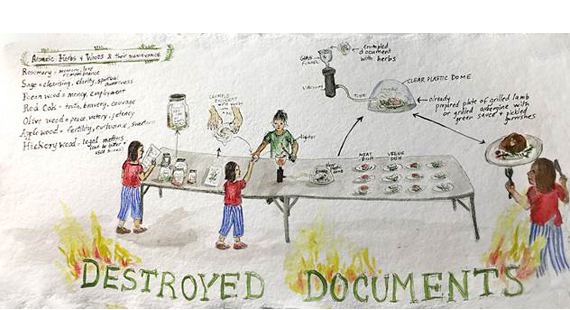 As one of the interlocutors of Sharjah Biennial 13, Ashkal Alwan is pleased to announce the fourth and final off-site project: Upon a Shifting Plate as well as the final iteration of SB13 Act II program, that will be taking place across Beirut from October 14 – 22, 2017.

Upon a Shifting Plate

Themed around the keyword culinary, Upon a Shifting Plate, will take place from 14 to 15 October across Beirut, through discursive and performative projects, where talks, workshops, walks, cooking sessions and other events explore the production and consumption of culinary heritage and how our eating habits condition and shape our psychological and cultural dispositions.

In this final chapter of the Biennial, Reem Fadda takes the idea of dormancy, from sleep to digestion, and looks at an embodied experience in the evolution of a language of art that beckons for more. In her exhibition Fruit of Sleep, artists delve into the imaginative, harnessing the aesthetic, using their art to respond to the urgencies and needs of the social.

Rather than asking for solutions and sketching utopias, Hicham Khalidi’s exhibition An unpredictable expression of human potential, seeks to respond to the present global moment, one in which a paradigmatic shift can be tasted in the air. The works in the exhibition address the current situation where frustrated young people are protesting against decisions imposed on them by older generations, sensitive to an inheritance they did not ask for and did not shape.

Act II features walks, lecture performances, talks, panels, theatre, music and dance across the city, as well as film screenings, including new SB13 commissions. Commissioned books will also be launched during the opening week of Act II, together with a compilation of the publications released throughout SB13 in Beirut, Dakar, Istanbul, Ramallah and Sharjah.

Curated by Christine Tohme, Sharjah Biennial 13: Tamawuj unfolds in five parts, from October 2016 through to October 2017.The biennial includes exhibitions and a public program in two acts in Sharjah and Beirut; a year-long education program in Sharjah; off-site projects in Dakar, Istanbul, Ramallah and Beirut; and an online publishing platform tamawuj.org.

Act II is co-organised by Sharjah Art Foundation and the Lebanese Association for Plastic Arts, Ashkal Alwan, a non-profit organization based in Beirut. Since 1993, the association has been committed to the production, facilitation and circulation of creative and theoretical endeavors across a range of disciplines and media.

Reem Fadda is an independent curator, based between Amman and Ramallah. From 2010-2016, Fadda worked at the Guggenheim Museum as Associate Curator, Middle Eastern Art, Abu Dhabi Project. From 2005 to 2007, Fadda was Director of the Palestinian Association for Contemporary Art (PACA) and worked as Academic Director for the International Academy of Art Palestine, which she helped found in 2006. She has curated many international exhibitions and biennials including Jerusalem Lives (Tahya Al Quds) at The Palestinian Museum, Birzeit (2017); Not New Now, 6th Marrakech Biennale, Morocco (2016); and the United Arab Emirates National Pavilion, 55th Venice Biennale (2012). Fadda was awarded the 8th Walter Hopps Award for Curatorial Achievement in 2017.

Hicham Khalidi is an associate curator for Lafayette Anticipations, Fondation d’entreprise Galeries Lafayette in Paris He is also working on a permanent public exhibition for the province of Flemish-Brabant. Khalidi was one of the curatorial attachés of the 20th Sydney Biennale (2016) and the Visual Arts curator of the 5th Marrakech Biennale (2014). From 2013 -2015 he was the head of exhibitions at STUK Art Centre in Leuven, Belgium. Khalidi is a board member of q-02, Overtoon and SPIN, centres and collectives for contemporary music, performance and theatre based in Brussels.

Christine Tohme is the founding director of Ashkal Alwan, the Lebanese Association for Plastic Arts, established in 1993. Ashkal Alwan is a non-profit organization supporting artistic practice, through various initiatives including Home Works: A Forum of Cultural Practices initiated by Tohme in 2001; and Home Workspace Program, a tuition-free study program initiated in 2011. Tohme is the recipient of Prince Claus Award in 2006 and the 2015 CCS Bard Audrey Irmas Award for Curatorial Excellence. She is on the boards of Marsa, in Beirut, a health centre providing specialized medical services for at-risk youth and marginalized communities and SAHA, in Istanbul, an association supporting contemporary art from Turkey.