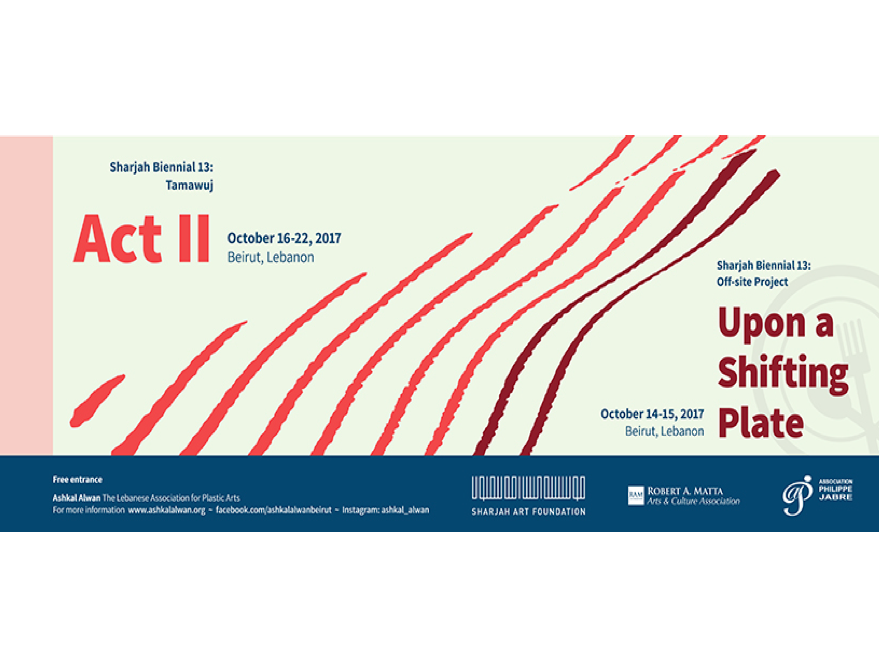 Ashkal Alwan is organizing Sharjah Biennial 13’s fourth and final Off-site Project Upon a Shifting Plate followed by Act II, the final iteration of the SB13 program, which will take place across Beirut from October 14-22, 2017.

In this final chapter of the Biennial, Reem Fadda’s exhibition Fruit of Sleep explores the notion of dormancy, looking at sleep as an act of neither the singular or collective mind, but rather of a social body carefully plotting action in the face of failed revolutionary attempts.

Hicham Khalidi’s exhibition An unpredictable expression of human potential seeks to address the current moment of disenfranchisement and frustration, pondering whether the young generation holds the vitality needed to upturn the socio-political legacies of modernity.

Act II features walks, lecture performances, talks, panels, theatre, music and dance across the city, as well as film screenings, including new SB13 commissions. Commissioned books will also be launched during the opening week of Act II, together with a compilation of the publications released throughout SB13 in Beirut, Dakar, Istanbul, Ramallah and Sharjah.

Curated by Christine Tohme, Sharjah Biennial 13: Tamawuj unfolds in five parts, from October 2016 through to October 2017.The biennial includes exhibitions and a public program in two acts in Sharjah and Beirut; a year-long education program in Sharjah; Off-site Projects in Dakar, Istanbul, Ramallah and Beirut; and an online publishing platform tamawuj.org.

An unpredictable expression of human potential at Beirut Art Center will be on view until January 19, 2018.

Fruit of Sleep at Sursock Museum will be on view until December 31, 2017.

Reem Fadda is an independent curator, based between Amman and Ramallah. From 2010-2016, Fadda worked at the Guggenheim Museum as Associate Curator, Middle Eastern Art, Abu Dhabi Project. From 2005 to 2007, Fadda was Director of the Palestinian Association for Contemporary Art (PACA) and worked as Academic Director for the International Academy of Art Palestine, which she helped found in 2006. She has curated many international exhibitions and biennials including Jerusalem Lives (Tahya Al Quds) at The Palestinian Museum, Birzeit (2017); Not New Now, 6th Marrakech Biennale, Morocco (2016); and the United Arab Emirates National Pavilion, 55th Venice Biennale (2012). Fadda was awarded the 8th Walter Hopps Award for Curatorial Achievement in 2017.

Hicham Khalidi is an associate curator for Lafayette Anticipations, Fondation d’entreprise Galeries Lafayette in Paris He is also working on a permanent public exhibition for the province of Flemish-Brabant. Khalidi was one of the curatorial attachés of the 20th Sydney Biennale (2016) and the Visual Arts curator of the 5th Marrakech Biennale (2014). From 2013 -2015 he was the head of exhibitions at STUK Art Centre in Leuven, Belgium. Khalidi is a board member of q-02, Overtoon and SPIN, centres and collectives for contemporary music, performance and theatre based in Brussels.