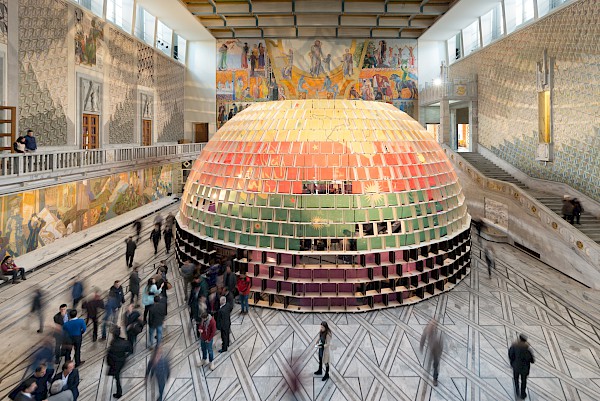 There has been a formal turn in art and social theory – with Judith Butler’s theorization of assembly as plural forms of performative action, for instance, being taken up in visual artist Jonas Staal’s proposal for “assemblism” as a morphological practice. However, such political formalisms still find themselves operating under conditions that are shaped by a different kind of form that is not immediately accessible to the senses, but rather operating like a deep structure that moulds reality. Here one can think of the capitalist value-form in its networked manifestations, and of the accompanying legal and technoscientific forms. Working together, and at times against each other, these forms of "real abstraction" can produce certain social manifestations and prevent others. The elaboration of organizational forms thus needs to be complemented by an engagement with the dominant schemata that structure subjects and objects, and forms of collaboration and collectivity. This lecture will discuss some of the possibilities of working with (and against) these operational abstractions – and using them as mediums to be (de-)transformed.

This public talk is part of the Home Workspace Program 2017-18.

Sven Lütticken (b. 1971 in Kempen, Germany) teaches art history at the Vrije Universiteit and theory at DAI. Lütticken publishes regularly in journals and magazines such as New Left Review, Texte zur Kunst, e-flux journal, Grey Room and Afterall. He is the author of Secret Publicity: Essays on Contemporary Art (2006), Idols of the Market: Modern Iconoclasm and the Fundamentalist Spectacle (2009), History in Motion: Time in the Age of the Moving Image (2013), and Cultural Revolution: Aesthetic Practice after Autonomy (2017).