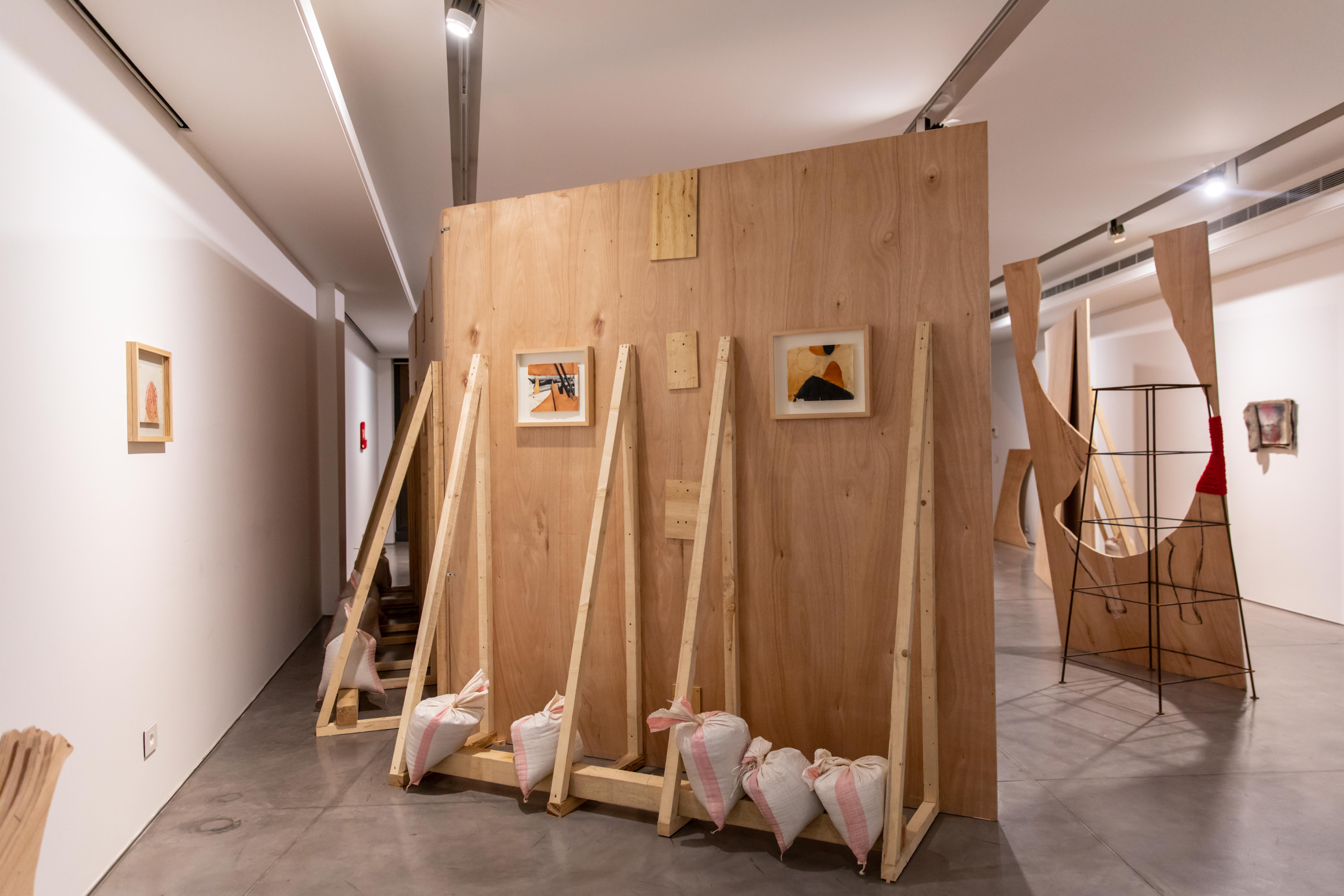 Following Radhika Khimji's first solo exhibition in Beirut at Letitia Gallery, Over, Through, and Around, the Omani artist will be in conversation with Reem Fadda about her making process.

Khimji playfully employs methods of construction on the surface of an image, intentionally destabilising the relationship between figure and ground to reassemble and make abstract a fragmented body.  By addressing issues of attachment and sexuality the abstracted corporeal elements in Khimji’s work act as witnesses to gender inequality and discrimination.  These are parts which engage with their environments, performing gestures within architectural landscapes, either found or made in situ.

Terms are set in flux placing painting, drawing, photography and sculpture up against each other to allow for a place between many polarities to emerge.  Khimji has developed a collaged way of working informed by the physicality and materiality of the making process to deconstruct, evade and erase constructions of formulated identities.  She borrows from a surrealistic language to shift cultural stereotypes and make visible a body screened by certain censorships.

Radhika Khimji (b.1979 Muscat, Oman) studied at the Slade School of Fine Art, the Royal Academy of Fine Arts and holds in MA in Art History from University College London. Recent solo exhibitions include Shift at Galerie Krinzinger, Vienna, 2019, On the Cusp at Stal Gallery, Muscat, 2018 and Becoming Landscape at Krinzinger Projekte, Vienna, 2017. Selected group exhibitions include The Drawing Biennial at Drawing Room, London, 2017 and the 6th Marrakech Biennale, Not New Now, Marrakech, 2016. The artist lives and works between Muscat and London. Over, Through, and Around is currently on at Letitia Gallery in Beirut.

Reem Fadda is a curator and art historian. From 2010 to 2016, Fadda worked at the Guggenheim Museum as Associate Curator, Middle Eastern Art, Abu Dhabi Project. From 2005 to 2007, Fadda was Director of the Palestinian Association for Contemporary Art (PACA), Ramallah and served as Academic Director for the International Academy of Art Palestine, Ramallah, which she helped found in 2006. She has curated many international exhibitions and biennials, including Fruit of Sleep, Act II, Sharjah Biennial 13, Sursock Museum, Beirut (2017); Jerusalem Lives (Tahya Al Quds), The Palestinian Museum, Birzeit (2017); Not New Now, 6th Marrakech Biennale, (2016) and the United Arab Emirates National Pavilion, 55th Venice Biennale (2013). Fadda was awarded the eighth Walter Hopps Award for Curatorial Achievement in 2017, and she received a Fulbright scholarship to pursue her PhD in the Department of History of Art and Visual Studies, Cornell University in 2008. She currently works as Curator for the Department of Culture and Tourism Abu Dhabi.

Image caption: Installation view of Over, Through and Around at Letitia Gallery, 2019, courtesy of the artist and Letitia Gallery. Photo by Mahmoud Rida.