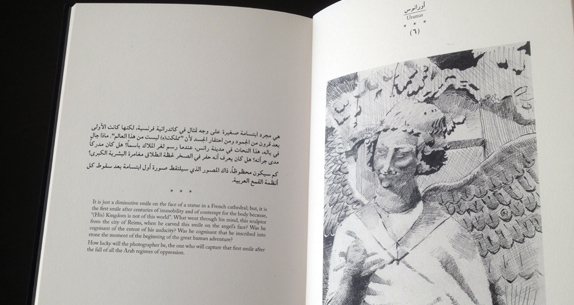 In 17th century Europe, “emblem books” were quite common, and they mainly spoke of the end of things, of a failed world and its defeats. In emblem books, everything became an allegory, and image and text were joined in a strange unity, where the image was not an illustration of the text and the text was not a caption for the image. The Dialogue That Is Us takes emblem books as its point of departure: from the wreckage of History, images are seized and transformed into allegories that illuminate the present of a world (the Arab World) that did not produce them. But then, in the wreckage of History, strange affinities form between things, no matter how remote. Ressentiment is a collection of selected poems on resident anger.

Edited and translated by Walid Sadek | Published by Ashkal Alwan (2013).

Tony Chakar (b. Beirut, 1968) is an architect and writer. His latest projects include The Eighth Day (2008), an ongoing project in the form of a lecture/performance; The Sky Over Beirut (Walking tours of the city, 2009), Ashkal Alwan, Beirut; An Endless Quick Nightmare (2011), project for MED11 (The Colombia Biennial, 2011); One Hundred Thousand Solitudes (2012), Meeting Points 6 (Beirut, Berlin, Athens, 2011); The Space of Nūn (lecture/performance, 2013); The Dialogue That Is Us, 11th Sharjah Biennial (2013). He also contributes to art and architecture magazines, and teaches History of Art and History of Architecture at the Académie Libanaise des Beaux Arts (ALBA), Balamand University.