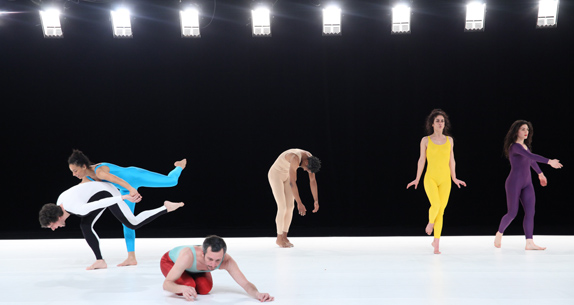 Boris Charmatz studied at the Ecole de Danse de l'Opéra de Paris and at the Conservatoire National Supérieur de Musique et de Danse de Lyon. In 1992 he joined Odile Duboc’s company Contrejour and co-founded the edna association with Dimitri Chamblas, and since 1997 collaborates with Angèle Le Grand. In 2002, he premiered héâtre-élévision, an installation piece designed for one spectator at a time. One of his latest works, 50 Years of Dance (2009), is performed by former dancers of the Merce Cunningham Dance Company. Charmatz was associate artist of the 2011 Festival d'Avignon. He was artist-in-residence at the Centre National de la Danse in Pantin (2002-04), and visiting professor at Berlin’s Universität der Künste. He co-authored the book Entretenir/ à propos d’une danse contemporaine with Isabelle Launay, and is the author of Je suis une école (2009). Charmatz is Director of the Rennes and Brittany National Choreographic Centre since 2009.

"In Merce Cunningham, un demi-siècle de danse, all of Cunningham is there—pictures from every piece, and Merce is portrayed from the age of five... When I read this book, it came to my mind that the collection of pictures was not only about nearly all of his projects, it also formed a choreography in itself close to Cunningham's processes to create dance: dance happens in between the postures, between two positions. And I thought we could invent a piece from this score of pictures, performed from beginning to end. On the one hand it would be a purely "fake Cunningham" piece, but on the other hand it could become a real , a meta-Cunningham event with a glimpse of his entire life and work… I consider this experience an integral part of our interest in archive, history and scores, which meets here its tumultuous dimension: the entire history of a life's work becomes a book, which in turn transforms into a performance elaborated by a handful of dancers." —Boris Charmatz