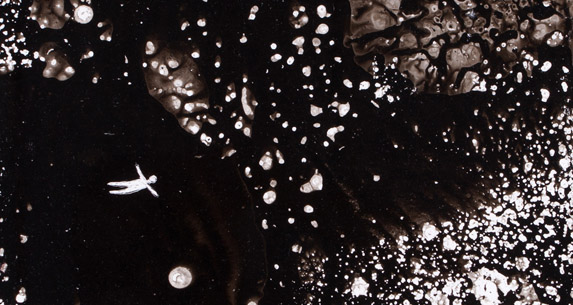 Tony Elieh plays electric bass and is founding member since 1998 of post-rock group Scrambled Eggs along with Charbel Haber. As a musician, Elieh is equally at ease in various styles of music from rock to experimentation and free jazz. Aside from his Scrambled Eggs discography and activities, Elieh has also performed with various groups and combinations such as BAO and The Johnny Kafta Anti-Vegetarian Orchestra in Lebanon, the US, France, Germany and Portugal among other places.

Charbel Haber plays electric guitar with a wide selection of electronics and devices. He is co-founder and member of Lebanese post-rock group Scrambled Eggs since 1998, and has released a dozen albums with the group and under his own name, touring and performing in both Europe and the USA. He is an active participant in Lebanon’s free-improvisation scene since 2002. Haber has also composed and contributed music for film (Joanna Hadjithomas and Khalil Joreige, and Ghassan Salhab), theatre (Rabih Mroué and Lina Saneh) and video art (Lamia Joreige, Akram Zaatari).

Mazen Kerbaj’s main activities include comics, painting and music. He has published more than a dozen books and many short stories and drawings in anthologies, newspapers and magazines such as L’Association, Dar el Adab, Internazionale and Le Monde Diplomatique. He also plays trumpet and is a founding member of the annual Irtijal festival taking place in Beirut since 2001, and the Al Maslakh label since 2005. He has exhibited and performed as a solo artist and collectively in Lebanon, France, England, Spain, Sweden, Germany, Switzerland, Australia and the US among other places.

Sharif Sehnaoui is a free-improvising guitarist. He plays both electric and acoustic guitars, with (or without) extended and prepared techniques, focusing on expanding the intrinsic possibilities of these instruments without the use of effects or electronics. He has performed his music worldwide and played in many festivals such as Soundfield Chicago, Moers, Mulhouse Music Festival, Maerzmusik, Skanu Mesz and Musikprotokoll. Along with Mazen Kerbaj he founded the Irtijal festival in 2001, contributing to the emergence of a vibrant experimental music scene in Lebanon. He also runs the labels Al Maslakh, Johnny Kafta’s Kids Menu and Annihaya.

Wormholes is an attempt to alter a specific segment within time and space, hoping to open a corridor between two artistic disciplines, allowing them to give each other meaning. The question of a music/ drawing performance has been persistent since the early stages of Mazen Kerbaj and Sharif Sehnaoui’s artistic relationship that started in the late 90’s. But how to frame it?

In 2008, Kerbaj came up with a new system he had developed, allowing him to draw live. It consisted of a glass table, with a wide array of ink, water, solvents, brushes and various unidentified objects. With this setting, both sound and visual elements exist only during the timeframe of the performance. The project seems to have endless potentiality. Originally an acoustic duo, the project will here be presented in its “electrified” version including Scrambled Eggs guitarists Charbel Haber and Tony Elieh.