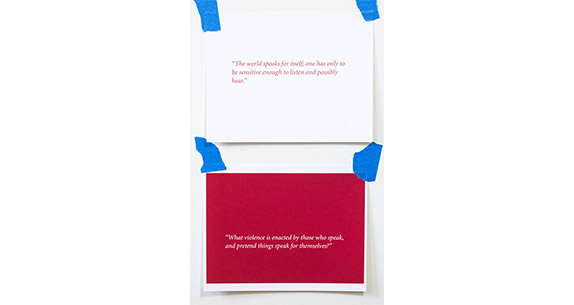 Proceeding from a number of case studies, Source – (filter) – Output is a two-day seminar addressing the varied relationships creative practitioners may assume towards their source material. Delving in between the clear divides of language and event, reading and writing, analysis and creation, we will try to touch on some of the implications of creative output and the role of the subject behind or contiguous to it. Through readings, viewings, and discussions, we will consider the sensual, cognitive, and technological filters artists may apply towards their source material, the type of systems and structures they may evoke to support their generation of forms and content, and how these processes and choices may, in turn, serve as the basis for the renunciation or assumption of authorship.

– Bahrani, Zainab (2003) Being in the Word: Of Grammatology and Mantic. The Graven Image (pp. 96-120). Philadelphia: University of Pennsylvania Press.

“Stories tell themselves. They don’t get told. Don’t try to impose yourself. Wait for the story to come and speak for itself. Wait and hope that it isn’t born deaf and dumb and blind.”

“The secret is the strictly unreflected upon form of truth. It never reaches a consciousness or vanishes when it does.”

“Some say numbers are not constructed by us, but are already there waiting for us to find our way to them. Counting rules might enable me to plod successfully from 1 to N, naming each number as I reach it, but who is to say that the button waiting for me to the immediate right of the button named N is indeed the button named N+1. In Funes the Memorious, Jorge Luis Borges writes about a man who constructs a counting that is not a system of counting, a counting that makes no assumptions about what comes next after N.”

The seminar with Iman Issa is part of HWP 2015-16: From The Miraculous to the Mundane.