Desire, Delirium and Productive Misunderstandings - A screening of films by Ulrike Ottinger 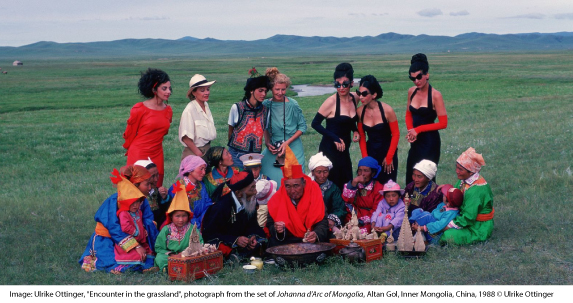 Desire, Delirium and Productive Misunderstandings: A screening of films by Ulrike Ottinger

In her films, Ulrike Ottinger consistently explores places near and far, familiar and unfamiliar, imagined and real, while simultaneously blurring these categories. Most visibly in her films of the late 1970s and early 1980s, she brings out the strange and the outlandish in the everyday, analyzing what it means to remove the familiar in order to regain its power of fascination.

The real becomes surreal and vice versa, with Ottinger’s characters drifting through space, time and bodies, led by desire into delirium. The visual lavishness, her radical experimentation with narrative form, and the use of queer and feminist perspectives to expose the constructs of sexuality, gender, and (sub-)culture, made Ottinger a pioneering figure of German cinema.

In her more recent work, Ottinger combines ethnographic study with fictional elements, focusing on specific cultural circumstances to point out the entanglement and interplay between tradition and modernity. Since the late 1980s Ottinger’s films have been mainly informed by an interest in the documentary and cross-cultural relationships, using the imaginary as a tool to re-calibrate models of social reality and re-animate history. Doing so, through playfully negotiating between cultural dispositions and common sense, Ottinger often creates something she herself calls “productive misunderstandings”.

The screening series Desire, Delirium, and Productive Misunderstandings organized by Daniel Berndt in collaboration with Goethe-Institut Libanon and Ashkal Alwan, comprises three of Ottinger’s most eminent films, that convey the two strands of her film-making – fiction and documentary. Ticket of No Return (1979) and Freak Orlando (1981) are both part of Ottinger’s ‘Berlin Triology’ in which the city serves as a backdrop for the phantasmagorical journeys of her characters, and Johanna d'Arc of Mongolia (1989) is a film about a peculiar group of European tourists traveling on the Trans-Siberian railway, who end up being kidnapped by a Mongolian princess and her entourage.

All three screening events are in English. ا

Four women meet on a train on their way to China and get kidnapped by a mysterious Mongolian princess. They are forced to follow the princess’ caravan through Inner Mongolia and eventually become acquainted with the nomads’ archaic rituals and customs. Using references to the road movie genre in combination with tropes of ethnographic filmmaking, Johanna d'Arc of Mongolia complicates the question of who is exotic, and to whom, in an amusing and compelling way.

Based loosely on Virginia Woolf’s novel “Orlando” Freak Orlando unfolds as a small theater of the world in five episodes. Ottinger sends her lead character, played by Magdalena Montezuma, on a bewildering and at times hilarious odyssey of constant transformation, which finally culminates in a contest for the ugliest people of “Freak City”.

Telling the story of a rich, eccentric woman, who travels to Berlin with a plan to live out the rest of her days as a drunkard, Ticket of No Return is also a portrait of two unusual and very different characters, that are trying to build up a meaningful relationship with one another. The film’s background is the city of Berlin, complemented by appearances of local rock singers, writers, and artists such as Nina Hagen, Wolf Vostell and Eddie Constantine. أ

Born in Konstanz, Germany, Ulrike Ottinger moved to Paris in the 1960s where she began her artistic career as a painter. During these formative years she was a student of Claude Lévi-Strauss and Louis Althusser. After having moved to Berlin in the early 1970s, she began directing films which included many protagonists of Berlin’s art, film and underground scene, such as Tabea Blumenschein, Irm Hermann and Magdalena Montezuma. In the late 1980s Ottinger’s cinema shifted away from theatrical fiction to documentary. Ottinger has received numerous awards including the Order of Merit of the Federal Republic of Germany and the Hannah Höch Prize. Her films have been shown in international festivals including Berlin International Film Festival and Toronto Film Festival. Ottinger’s work has been exhibited in numerous museum shows and biennales as well as Documenta 11.

Daniel Berndt studied Art History, Philosophy and Social Anthropology at Freie Universität Berlin. He was a PhD fellow at the graduate program The Photographic Dispositif at the Braunschweig University of Art, where he wrote his dissertation on the usage of historical photographs in contemporary art. From 2009 to 2012 he worked as Research Center Coordinator at the Arab Image Foundation in Beirut. Currently, he is a research associate in the Politics of the Image project at the German Literature Archive, Marbach.