To Neither Confirm Nor Deny that the Matter Neither Reflected Nor Absorbed Light: Lecture by Haig Aivazian 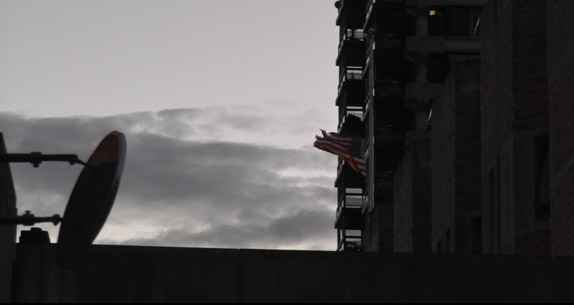 Haig Aivazian (b. Beirut, 1980) is an artist, curator and writer. Using performance, video, drawing, installation and sculpture, his work weaves together personal and geopolitical, micro- and macro-narratives in search of ideological loopholes and short circuits. Aivazian holds an MFA from Northwestern University and is a Skowhegan alumnus (2011). Aivazian’s works have been included in several exhibitions and festivals including at Mercer Union, Toronto (2011); FIDMarseille (2012); and VideoBrasil, Sao Paulo (2013). Among his curated exhibitions are: Roads Were Open/ Roads Were Closed at The Third Line, Dubai (2008); and Plot for a Biennial, the 10th Sharjah Biennial (2011) of which he was Associate Curator. Aivazian has written for a number of publications including Manifesta Journal, FUSE, Ibraaz, Bidoun, ArteEast and The Arab Studies Journal. He is currently based in New York.

A In his multi-part project entitled To Neither Confirm Nor Deny that the Matter Neither Reflected Nor Absorbed Light, Haig Aivazian looks at the stories, dynamics and narratives that have emerged from the visualizations of the so-called Dominique Strauss-Kahn Affair. Centred around an assault in a Sofitel suite in Manhattan, where the only witness is also the survivor of the attack, the work seeks to ultimately present a strange framework, through which an immaterial globalized financial economy and corporeal violence become inextricably linked.