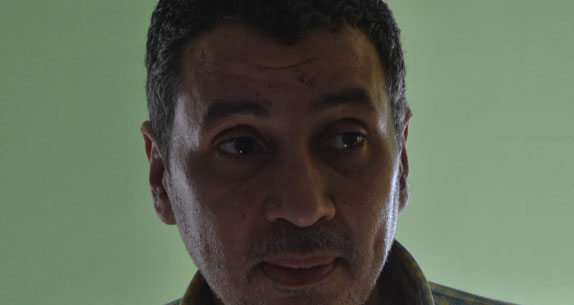 Ibrahim Dawood (b. 1961) studied accounting and economics and graduated from the College of Commerce in 1983. He works in journalism since the mid-80s and has been a regular contributor to the Egyptian daily Al Ahram for the past 15 years. He has published six volumes of verse: Tafāsīl (Details); Aš-Šitā' Al Qādim (Next Winter); Matar Khafīf fil Kārij (A Drizzle Outside); Lā Ahada Huna (No One is Here); Infijarāt Idāfiyya (Extra Explosions); as well as the selected works Yabdu Annani Junint Muta'akhiran (It Seems I've Gone Crazy Lately) and the collected works Sit Muhawalāt (Six Attempts). His verse has been translated into English and French. His prose works include Khārij Al Kitāba (Outside Writing), The Atmosphere (winner of the Sawiris 8th Cultural Award), and Al Qor'ān fi Misr (The Qoran in Egypt).

Every now and then, in works of literature and drama, one comes across characters that are unpackageable, not so much for their want of a human form, but simply because pinning them down would require a love that is beyond the idea of writing, beyond the projections of the critic. Such characters are unconcerned by the sorrows (or illusions) of the elite, they are merely concerned by life itself. I have encountered, before, during and after the Egyptian revolution, a not-bad number of these characters, and there grew between us all sorts of clouded relationships. Through my paper I try to get close to their world and to their little details, in an attempt to rid myself of the omnipresent burden of politics, and recover some long-misplaced childhood. With their simple dreams and longings, these characters represent the aquiferous waters of the Egyptian psyche, currently getting carried away by the image and relationship production of our small and big screens. These characters are my solace in the face of resident darkness.