Have You Ever Killed a Bear? or Becoming Jamila: Lecture-Performance by Marwa Arsanios 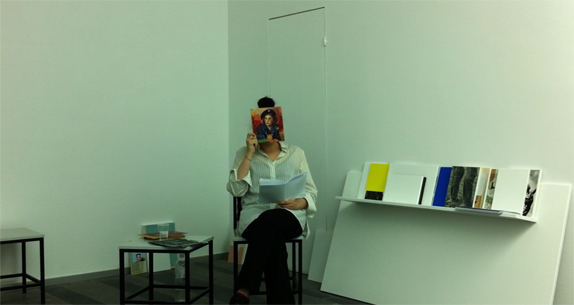 Marwa Arsanios (b. Washington DC, 1978) obtained her MFA from University of the Arts, London (2007), and was a researcher in the fine art department at the Jan Van Eyck Academie (2011-2012). Her work and videos have been widely presented, including in Art Dubai (Bidoun Lounge, Art Park); the Forum Expanded of the Berlinale (2010); Home Works 5 (Beirut, 2010); Tokyo Wonder Site (2010); the Rio de Janeiro Film Festival (2010); the e-flux storefront (New York, 2010); the Centre Pompidou (Paris, 2011); and most recently at the 12th Istanbul Biennial and the Cornerhouse (Manchester, 2012).She was granted the artist’s residency at the Arab Image Foundation (2009) and the research residency at Tokyo Wonder Site (2010), and was a Special Prize Winner of the Future Generation Art Prize 2012. Arsanios is a founding member of 98weeks research project/ space.

Have You Ever Killed a Bear? or Becoming Jamila - Marwa Arsanios | Lecture-performance

Have You Ever Killed a Bear? or Becoming Jamila is a lecture-performance that departs from the artist's reading of Al-Hilal magazine from the fifties, and slowly transforms into a literary tale where Arsanios embodies iconic characters, such as Jamila, who inhabited the magazine and haunted the epoch. Voices collide and stories clash.