Reading Le Corbusier in Arabic & Other Fragments of Modernity: Lecture by Mohamed Elshahed 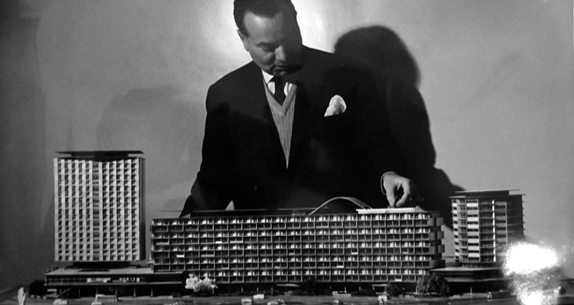 Mohamed Elshahed is a doctoral candidate in the Middle East Studies Department at New York University. His research focuses on architecture and urban planning in Egypt from the 19th century to the present. Elshahed’s dissertation examines the role of the built environment during Egypt’s political transition from monarchy in 1936 to republic in 1967 with an emphasis on the Nasser years. He holds a Bachelor of Architecture from the New Jersey Institute of Technology and a Masters in Architecture Studies from Massachusetts Institute of Technology (MIT). Elshahed is the founder of the weblog cairobserver.com focusing on the Egyptian capital's architecture, urbanism and cultural heritage.

After returning to Cairo in 2010 to conduct fieldwork for his doctoral research on 20th century architecture in Egypt, Elshahed built a collection of publications, periodicals, documents, photographs and other ephemera. The initial intent was to utilize architecture as a lens through which to address Egypt’s political and cultural conditions in a period roughly framed by WWII and the Six-Day War. However, the small collection of objects, which came together as each item promised to deliver a piece of the puzzle, and the excavation through this collection in an attempt to construct a narrative, has opened up questions about in-between histories, incompleteness, the historical canon and the authority of documents and historians, among other things. This talk will use this collection of printed matter in an attempt to recontextualize and question the dividing lines between the personal and the collective, the monumental and the ephemeral, history and memory, the official and the marginalized.