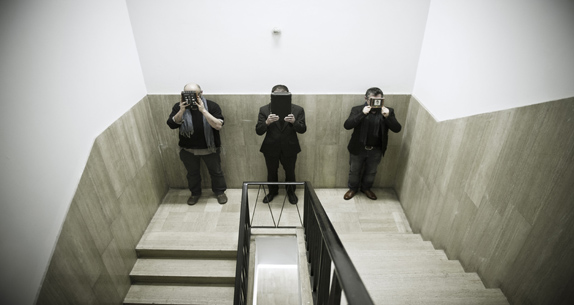 Omar Dewachi is an Iraqi-Canadian academic and musician based in Lebanon. Trained in classical Iraqi oud and Iraqi Maqam music, Dewachi has performed in numerous concerts and festivals in Europe, North America and the Middle East. In addition to Iraqi and Arabic music, he dwells in a variety of improvisational genres including free-improvisation, jazz, psychedelic and experimental music. His recent albums include Towers Open Fire and City of Salt.

Paed Conca is a Swiss composer and musician residing in Lebanon. He plays clarinet, electric bass and electronics. In addition to City of Salt, he has been involved in numerous projects over the years— such as PRAED, Porta Chuisa Under the Carpet, Gamara, and Tranisch.

Sam (Osama) Shalabi is a Canadian-Egyptian composer, improviser, guitarist and oud player currently based in Cairo. Over the last 20 years he has released four solo albums (Luteness, On Hashish, Osama and Eid), as well as various albums with other ensembles such as Shalabi Effect, Nutsak, and more recently City of Salt and Land Of Kush. Shalabi tours extensively in Europe, the US and North Africa and also writes for film, dance and theatre.

City of Salt is the trio of clarinet, oud and electric guitar, which draws on some of the more untrodden traditions of group improvisation to map out what could be called a Third Stream Arabic Music. Neither the easy juxtapositions of “oriental jazz” nor the all too-reverential treatments of “traditional” Arabic taksim, the trio follows a third path, using other blueprints or sources implicit in the ground of Arabic maqam and free improvisation to create another “stream” of improvisation—a more open, extended approach to form and melody, both “oriental” and “occidental”.