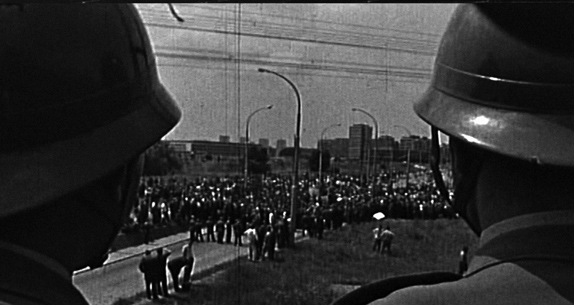 TkH (Walking Theory) is an independent platform for performing theoretical-artistic activism based in Belgrade. It is initiated and run by the editorial collective whose members are theorists and artists coming from performance, theatre, cinema, and visual arts.

Bojana Cvejić is a theorist and performer. She holds a PhD in philosophy and an MA and BA in musicology. Cvejić is a lecturer at Utrecht University and teaches at contemporary dance schools (such as P.A.R.T.S. in Brussels). She is the author/ editor of several books (recently, A Choreographer’s Score with A. T. De Keersmaeker, Public Sphere by Performance with A. Vujanović, and Parallel Slalom: Lexicon of Nonaligned Poetics with G. S. Pristaš).

Marta Popivoda is a ﬁlm and video maker and a cultural worker based in Berlin and Belgrade. She holds a BA and an MA in film directing (FDA, Belgrade) and a postgraduate degree in experimental film (UdK Berlin). Her most prominent work is illegal_cinema (Belgrade, Paris, Bilbao), while her latest film Yugoslavia, How Ideology Moved Our Collective Body premiered at the 63rd Berlinale.

Ana Vujanović is a theorist, curator and dramaturge in contemporary performing arts and culture. She holds a PhD in Theatre Studies. She is author of four books, most recently Public Sphere by Performance, with Bojana Cvejić. Vujanović is currently international visiting professor at the Department for Performance Studies, University of Hamburg.

Ana Vujanović, Bojana Cvejić and Marta Popivoda will present two recent TkH productions that result from their research Performance and the Public conducted in Paris (Les Laboratoires d’Aubervilliers), Belgrade (Magacin u Kraljevića Marka), Amsterdam (Het Veem Theater) and Berlin (Tanzfabrik) in 2011-2012. The theoretical and political perspectives of this transdisciplinary research stem from the discontinuous experiences of participation in the public sphere in former socialist Yugoslavia and contemporary Western neoliberalism. The point of departure for the book, written by Cvejić and Vujanović, is the recurrent problem of the public: the eclipse of the public sphere throughout the twentieth century as a marker of the crisis of representative democracy. The authors propose social choreography and social drama, as well as an analysis of contemporary performance of the self, as instruments that reframe the discussion on the public and its discontents. The documentary ﬁlm directed by Popivoda deals with the question of how ideology performed itself in public space through mass performances. The author collected and analysed ﬁlm and video footage from the period of Yugoslavia (1945 – 2000), focusing on state performances as well as counter-demonstrations. Going back through the images, the film traces how communist ideology was gradually exhausted through the changing relations between the people, ideology, and the state.