In Praise of Rootlessness: Lecture by Reza Negarestani 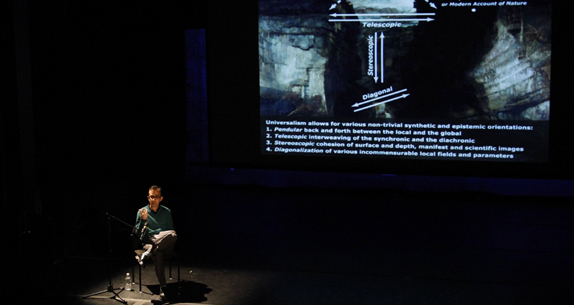 Reza Negarestani is a philosopher and novelist. His works have appeared in numerous journals and anthologies such as Collapse, Angelaki, Identity, The Speculative Turn and Realismus Jetzt. He is the author of Cyclonopedia: Complicity with Anonymous Materials (Melbourne: re.press 2008) and the co-editor of Collapse Journal of Philosophical Research, volume vii.

Hisham Awad is a writer living and working in Beirut. His work investigates the intersections between philosophy, film, and sound, as well as syntheses of theory and fiction in the cinematic, the sonic, and the novelistic. He completed an MA in Aural and Visual Cultures at Goldsmiths, University of London in 2011 and is a participant in Ashkal Alwan's Home Workspace Program 2012-13. He recently presented Physical Memories at The Status of Sound: Writing Histories of Sonic Art conference (The Graduate Center, City University of New York), and The Liquid and the Arid (Barber Shop project space, Lisbon). With Basia Lewandowska Cummings, Awad is working on a project examining cinematic and post-cinematic montage; the first instalment, Four Ways to Read the Cut, is published by 98weeks project space.

As the arch-nemesis of both localist fundamentalism and the global myth of common grounds, universalism can be traced back to the public and communal organization of the world in the absence of any possibility of privacy-in-the-last-instance. The aim of this talk is threefold; one, to examine the conceptual structure of universalism as a generative field between understanding and action; two, synchronizing universalism with the post-Copernican universe of modern sciences; and three, to propose a general topography of the universalist thought as a regional procedure that step-by-step frees the subject from “the tyranny of the here and now."