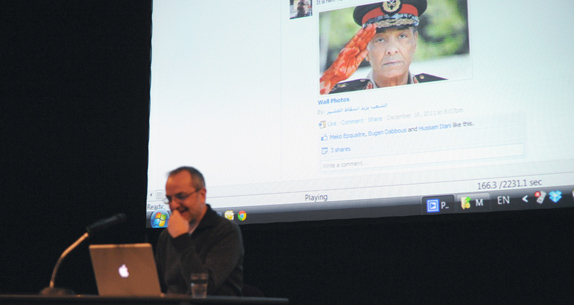 Tony Chakar (b. Beirut, 1968) is an architect and writer. His latest projects include The Eighth Day (2008), an ongoing project in the form of a lecture/ performance; The Sky Over Beirut (walking tours of the city, 2009), Ashkal Alwan, Beirut; An Endless Quick Nightmare (2011), project for MED11 (The Colombia Biennial, 2011); One Hundred Thousand Solitudes (2012), Meeting Points 6 (Beirut, Berlin, Athens, 2011); The Space of Nūn (lecture/ performance, 2013); The Dialogue That Is Us, 11th Sharjah Biennial (2013). He also contributes to art and architecture magazines, and teaches History of Art and History of Architecture at the Académie Libanaise des Beaux Arts (ALBA), Balamand University.

“A hundred profound solitudes together constitute the city of Venice. That is its charm. A model for the men of the future.” (Friedrich Nietzsche)

One Hundred Thousand Solitudes examines images that came out of the Arab revolutions and from different Occupy movements throughout the world. These images are singularities, singular moments, that lead to the declaration of the coming of Messianic times – without a Messiah: The dead coming back to life, rivers turning into blood, people speaking in one tongue, the last becoming first, the reversal of historical order, men turning into women and vice versa. These images were not witnessed first hand, but through social media (mainly Facebook and YouTube) – In other words, from deep within our solitude and isolation.