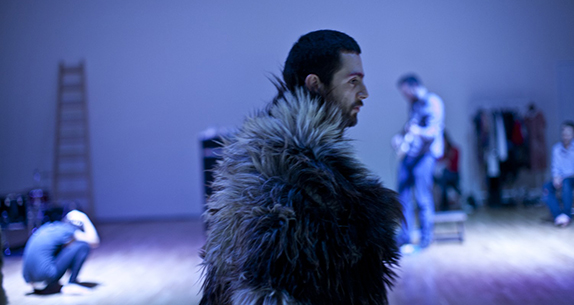 Meg Stuart is choreographer and dancer living and working in Brussels and Berlin. She has collaborated with theatre directors, actors, composers and visual artists such as Hahn Rowe, Christoph Marthaler, Gary Hill, Ann Hamilton, Doris Dziersk and Philipp Gehmacher, among others. With her Brussels-based company Damaged Goods, Stuart has created over twenty productions, ranging from solos to large-scale choreographies and including site-specific creations and installations. Over the years she has initiated and taken part in several improvisation projects. Her work has travelled a wide international theatre circuit and has also been presented at Documenta X (1997) in Kassel and at Manifesta 7 (2008) in Bolzano. Stuart also gives workshops in a variety of contexts. She received the Bessie Award (2008); the Flemish Culture Prize in the category of performing arts (2008); and the German Konrad-Wolf-Preis (2012).

A recurrent interest in the works of choreographer Meg Stuart is the search for new presentation contexts by continuously reformulating interdisciplinary forms of cooperation. During Stuart’s residency at HAU Hebbel am Ufer (Berlin) in 2013, she invited a group of performers, musicians and visual artists to share the space, their sensibilities and their skills towards a series of rough sketches and intimate investigations, presenting themselves as an open field of actions reduced to their most essential features. This event shapeshifts between movement structures, future proposals and layers of notes. Objects, music and light fold around the dancers to obscure, highlight and reveal the movement. The audience is invited to open a shared notebook of sketches and witness the knitting, the drawing and the sharing of this momentary artist collective.

Created in collaboration with: