The Last Days of the Ceaușescus by Milo Rau 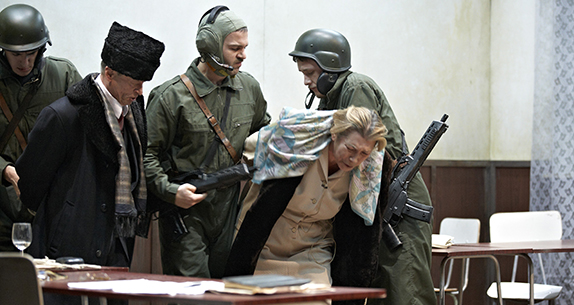 Milo Rau (b. Bern, 1977) studied sociology and German and Romance languages in Zurich, Berlin and Paris. Rau works in theatre and film, and as a journalist, author, lecturer and essayist. He has worked as author and director at various independent, municipal and state theatres, including the Staatsschauspiel in Dresden, the Maxim Gorki Theatre in Berlin and the Theaterhaus Gessnerallee in Zurich. Rau developed reenactment as a format for political theatre with The Last Days of the Ceauşescus (2009), performed at the Festival d’Avignon, followed by Hate Radio (2011), presented at Munich’s Radikal Jung festival and the Berlin Theatertreffen. Rau founded the International Institute of Political Murder in 2007. He currently lives between Zurich, Cologne and Southern France.

The images of the condemnation and execution of dictator Nicolae Ceaușescu and his wife Elena on Christmas Day in 1989 are etched deeply in the collective unconscious of several generations of television viewers. Exactly 20 years after its occurrence, the famous show trial was re-enacted in a historically reproduced setting. The film interweaves the stage production with interviews conducted with eyewitnesses and archive material, and takes a look backstage in the Odeon Theatre in Bucharest.