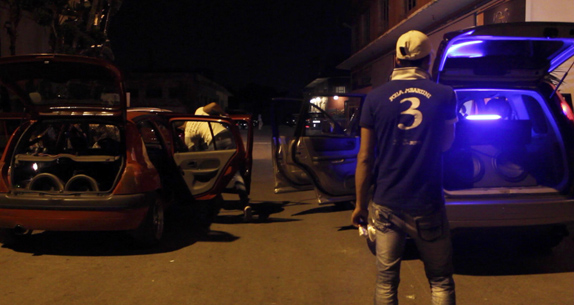 Please join us for cocktails next Tuesday 14th May at 5pm to celebrate the opening of Home Works 6!

The evening will include the distribution of a pamphlet by writer Waddah Charara, a sound performance by Joe Namy and 6 cars -

and announcing the Lebanese premiere of Sadat El 3alamy with DJ Amr 7a7a on the street outside Home Workspace in Jisr El Wati.

The Islam of Sacred Law & The Islam of State: Revivification and its War on the Tanzimat - Waddah Charara | Pamphlet | 2013

In opposition arose a number of “intellectual” causes, led by the example of the ideologues Jamal ed-Din Afghani, Hasan al-Banna, Rashid Rida, Sayyid Qutb, Ruh Allah Khomeni, and Ali Sharati. The common denominator among all of these ideologues is that they brought forth a vision of Islam as a religion of general and universal appeal that cancelled all opposing viewpoints, and did not participate with others in any public sphere or in general principals. War then became the only acceptable measure of one’s relationship to the fatalists, secularists, the morally lax, and the debauched. The only notion of “reform” acceptable to reason, assuming that “reform” had any meaning at all, was an unmoving rootedness in Islam and its virtues – a rootedness held in open contradiction to other, non-Islamic religions, sects, or beliefs. True revivification from within was a renewal that drew on one defined source, refusing foreign and lowly elements. The pronouncements and political parties of these ideologues were pronouncements of violence, accusation of deviation and heresy, differentiation and struggle, both material and ideational.

In this sense, the war of the Islamic Cause of Sacred Law against the Muslims of the State is a civil war, whose two apparent horizons are despotism and extermination.

Waddah Charara is a Lebanese writer, journalist, translator and professor of sociology. He was engaged in political party and syndicate activism, then cut short his activities just prior to the outbreak of Lebanese wars and devoted his time to writing. He has written on diverse subjects from Lebanese political and social issues, to Islamic political movements, to literature, poetry and cinema. His published works include As-Silm al-Ahliy l-Bāred: Lubnān l-Mujtama‘ wa d-Dawlah 1964-67 (The Cold Civil Peace: The 1964-67 Social and State Lebanon), 1980; Dawalat Ḥizbullāh: Lubnān Mujtama‘an Islāmiyyan (The Hizbollah State: Lebanon as Islamic Society), 1996; Ahwā’ Bayrūt wa Masāriḥuhā (Loves and Scenes of Beirut), 2008; and the collection Tašrīq wa Taġrīb (The Go East and Go West), 1989. He has translated into Arabic works of authors such as Anna Akhmatova, Paul Celan, Michel Tardieu and Antonio Gramsci among others.

Here in my car/ Where the image breaks down/Will you visit me please?/ If I open my door/In cars(Gary Numan, Cars).

This performance pays homage to the ever-present instrument that defines Beirut's sonic landscape yet defies definition: the synthesizer. This outdoor performance will explore the most popular way Beirut consumes the synthesizer's amplified grittiness: through cars. Using processed field recordings, Automobile mines the lush soundtracks that score corniche kazduras after dark – machine music for waves and humans.

Sadat was the first group to sing, record and upload wedding songs that later became known as “Mahraganat” or “Festival” songs. Our first song, which we started playing 6 years ago, was called “Al Salam Festival” because we live in Al Salam City - a district in north Cairo. Our biggest hit to date is “Ana elli e’shty haram fi haram” (My life full of sins) and is how people started to know about us.

Our music is a mix between rap and shaaby music. We write and compose our own songs. Our lyrics are inspired by street culture with all its social problems and issues. Our friends sometimes help us develop some of our songs, and we have found widespread success playing in shaaby weddings.

This concert was made possible with the generous support of Cherine and Ahmed Tayeb.