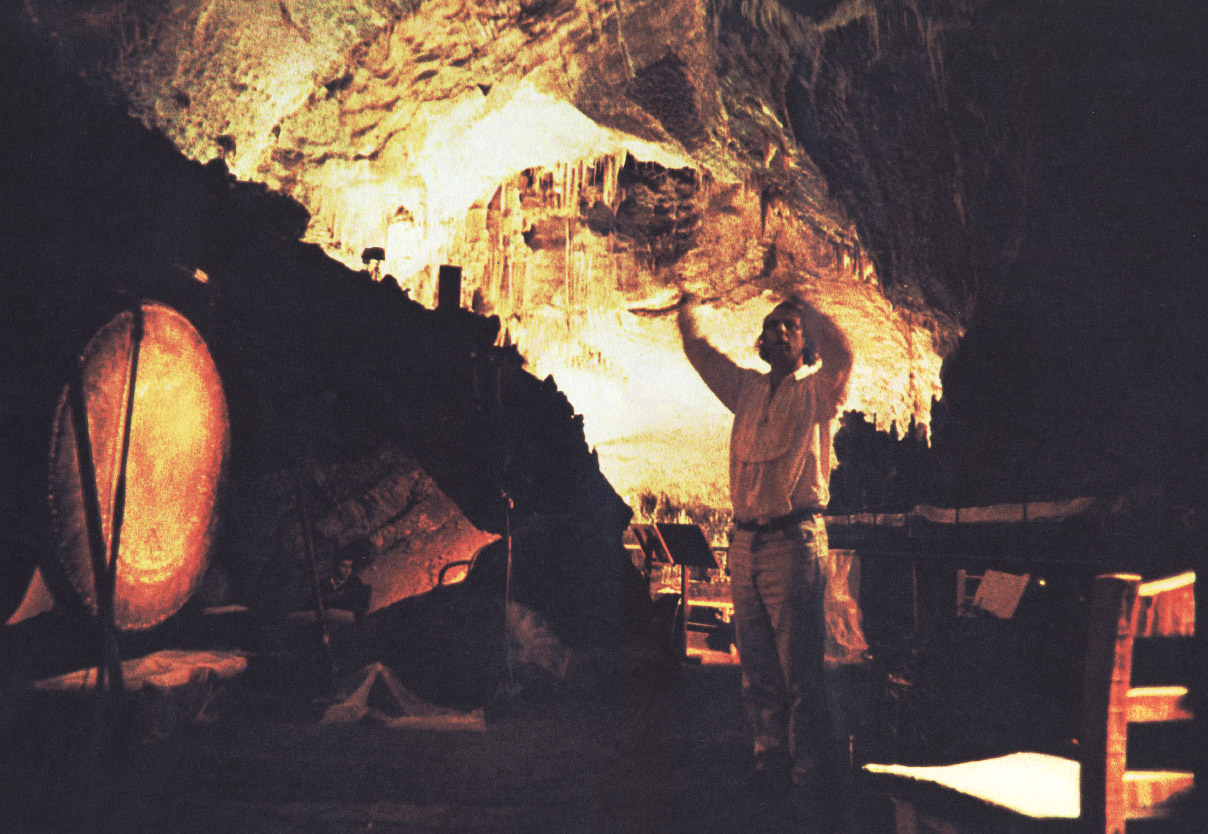 This project looks into a four-day musical event that took place in Lebanon’s Jeita Grotto in 1969, hosting the world-renowned music composer Karlheinz Stockhausen. In this lecture performance, artist Raed Yassin travels into Stockhausen’s cosmic exploration of the human condition and universalism, as well as the sonic experimentations he undertook while inside the cave. Caves have been a holy source of inspiration for millennia, as their unique composition obscures notions of space, time, and sound. The word of God in Islam was revealed to the Prophet inside a cave, and the story of the Seven Sleepers who entered a cave and woke up three hundred years later recurs in different religions and mythologies. Within this context, Yassin reimagines the sonic echo of Stockhausen’s legendary Stimmung, exactly 50 years after it was played at the Jeita Grotto. As if by way of science fiction, the echo of the music has been trapped in a time loop inside the cave, and here, the artist posits himself as a conjurer, releasing its resonance once again.

The first version of Time Tuning was commissioned by Sharjah Art Foundation and ACC Gwangju for the exhibition Time is Out of Joint.

Raed Yassin (b. 1979, Beirut) lives and works in Beirut and Berlin. He graduated from the Theatre Department of the Institute of Fine Arts at the Lebanese University in Beirut in 2003. An artist and musician, Yassin’s work often originates from an examination of his personal narratives and their position within a collective history, through the lens of consumer culture and mass production. One of the organisers of Irtijal Festival—Beirut’s experimental contemporary music festival—Yassin has released several music albums and founded the production company Annihaya in 2009. He has exhibited and performed in numerous museums, festivals, and venues, including Borderline Festival (2019); Maerzmusik (2018); Nottingham Contemporary, UK (2017); the Solomon R. Guggenheim Museum, New York (2016); Leighton House Museum, London (2015); Stedelijk Museum, Amsterdam (2014); Gwangju Museum of Art (2014); Castello di Rivoli, Turin (2014); Delfina Foundation, London (2014); New Museum, New York (2012); Sharjah Biennial 9 & 10 (2009 and 2011); and Centre Pompidou, Paris (2011).