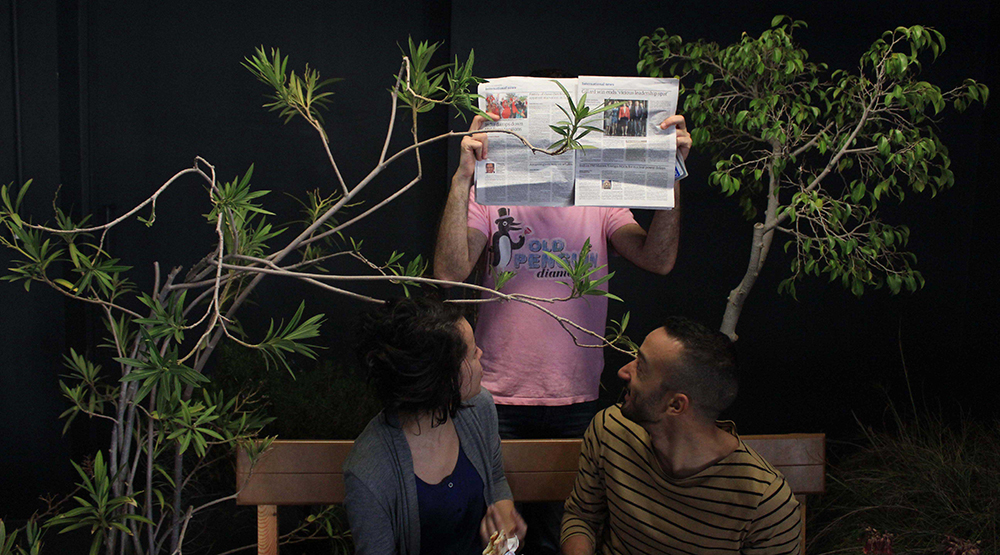 Ashkal Alwan is pleased to announce the open call for applications to participate in the eighth edition of Home Workspace Program (HWP), taking place in Beirut from October 8th, 2018 through July 22nd, 2019.

HWP is a 10-month study program that enrolls 10-15 fellows every year. The program is open to artists and writers aiming to develop their formal, theoretical and critical skills. Each fellow is granted a merit-based scholarship and a shared studio space. Some of the program’s lectures, seminars, and workshops are open free of charge to non-enrolled participants.

The program begins with a two-week Preface, offering an in-depth introduction to the program, as well as to Lebanon’s urban and cultural landscape, conducted through site visits and discussions with invited guests.

The Preface is followed by six Workshops led by Visiting Professors (VP). The VPs are invited for an extended period of time, alongside guests of their choice, to explore forms, themes and media affined with their distinct artistic practices.

In parallel, the Seminars consist of up to six hours of lectures, over a two-day period exploring concepts, histories and practices close to the guest’s current or former areas of interest.

The Resident Advisor accompanies fellows for the duration of the program through tutorials, group and individual critique sessions.

Please revisit this page regularly; more information will be released at a later stage.

For 2018-2019, fellows are selected through an open call. Candidates are considered on merit, as well as on their application’s relevance to the mission and context of HWP. The Admissions Committee selects an initial shortlist of candidates for interviews. Shortlisted applicants will be contacted for a Skype interview on short notice. Selected fellows are notified by April 30, 2018.

We confirm the receipt of all applications. Please get in touch if you do not hear from us within a week of sending your application.

• Writers and artists working in any genre or medium.

• Former fellows are not eligible.

• Applicants must commit full-time to HWP’s assigned schedule. External engagements must be kept at an absolute minimum and should not interfere with attendance and participation in the program.

• Due to the international scope of HWP’s professors and fellows, the program’s language is English. If necessary, fellows are advised to take an English language course prior to the start of / or during the program.

• Collectives and other collaborating artists should submit separate applications, and will be considered independently from one another. • HWP tuition is free; every fellow admitted to the program is granted a merit-based scholarship.

• Fellows are expected to secure additional funding to cover their living and production costs.

• A limited number of financial support grants are available on a need basis. Lawrence Abu Hamdan is an artist and “private ear” working in sound and its intersection with politics. In 2013, Abu Hamdan’s audio documentary, The Freedom of Speech Itself, was submitted as evidence at the UK asylum tribunal where Abu Hamdan was called to testify as an expert witness. He continues to make sonic analyses for legal investigations and advocacy for organizations such as Amnesty International, and was prominently part of the No More Forgotten Lives campaign for Defense for Children International. The artist’s forensic audio investigations are often conducted as part of his research for Forensic Architecture research agency.

Mirene Arsanios is the author of The City Outside the Sentence (Ashkal Alwan, 2015). Her writing has appeared in publications such as The Brooklyn Rail, The Rumpus, Enizagam, and The Outpost, among others. She co-founded the collective 98weeks Research Project in Beirut and is the founding editor of Makhzin, a bilingual literary magazine. She holds an MA in Contemporary Art Theory from Goldsmiths College and an MFA in writing from Bard College. She currently lives in New York City.

Céline Condorelli is a London-based artist. She is currently a professor at Nuova Accademia di Belle Arti, Milan, and one of the founding directors of Eastside Projects, Birmingham. She is the author and editor of Support Structures (Sternberg Press, 2009) and the monograph bau bau (Mousse, 2017). Condorelli has exhibited internationally, including at IMA Brisbane, Australia; Gwangju Biennale; Liverpool Biennial; Sydney Biennial; Kunsthalle Lissabon; HangarBicocca, Milan; Chisenhale Gallery, London; Van Abbemuseum, Eindhoven; and SALT, Istanbul; amongst others.

Yasmine Eid-Sabbagh studied history, photography and visual anthropology in Paris. From 2006 to 2011, she lived in Burj al-Shamali, a Palestinian refugee camp near Sour (Tyre) in south Lebanon, where she carried out photographic research including a dialogical project with a group of young Palestinians and archival work on family and studio photographs. Since 2008, Eid-Sabbagh has been a member of the Arab Image Foundation. She is also a doctoral candidate at the Academy of Fine Arts in Vienna.

Iman Issa is an artist currently based in Berlin. She has recently participated in solo and group exhibitions at MoMA, New York; Modern Art Oxford; Solomon R. Guggenheim Museum, New York; 21er Haus, Vienna; MACBA, Barcelona; the Perez Museum, Miami; MuHKA, Antwerp; and Tensta Konsthall, Stockholm. Her book, Common Elements, was published by the Glasgow Sculpture Studios (2015) and Thirty-three Stories about Reasonable Characters in Familiar Places was published by the Sculpture Center (2011). She has been named the DAAD Artist in Residence (2017) and is the recipient of the Vilcek Prize for Creative Promise (2017); the Louis Comfort Tiffany Foundation Award (2015); HNF-MACBA Award (2012); and the Abraaj Group Art Prize (2013). Issa teaches at the Cooper Union School of Art, New York.

Maha Maamoun is a Cairo-based artist. She is interested in examining the form, function and currency of common visual and literary images as an entry point to investigating the cultural fabric that we weave and are weaved into. Maha also works collaboratively on independent publishing and curatorial projects. She co-founded the independent publishing platform called Kayfa-ta in 2013 and is a also a founding board member of the Contemporary Image Collective (CiC) – an independent non-profit space for art and culture founded in Cairo in 2004.

Suhail Malik is Co-Director of the MFA Fine Art, Goldsmiths, London, where he holds a Readership in Critical Studies, and was 2012-15 Visiting Faculty at CCS Bard, New York. Recent publications include, as author, On the Necessity of Art’s Exit From Contemporary Art (2017) and ‘The Ontology of Finance’ in Collapse 8: Casino Real (2014), and as co-editor, Realism Materialism Art (2015), Genealogies of Speculation (2016), The Time-Complex. Postcontemporary (2016), a Special Issue of the journal Finance and Society on ‘Art and Finance’ (2016), and The Flood of Rights (2017).

Joe Namy is a composer and media artist. His work often addresses identity, memory, power, and currents encoded in organized sound/music, such as the politics and gender dynamics of bass, the color and tones of militarization, or the migration and asylum patterns of musical instruments. His work has been exhibited, screened, and amplified at the Asia Culture Center in Gwangju, the Berlinale, the Brooklyn Museum, the Beirut Art Center, the Detroit Science Center, and less prominent international dance floors. Some of his projects fall under the sound art platform titled Electric Kahraba, an experimental radio program that operates out of clocktower.org.

Jalal Toufic is a thinker and a mortal to death. He was born in 1962 in Beirut or Baghdad and died before dying in 1989 in Evanston, Illinois. Many of his books, most of which were published by Forthcoming Books, are available for download as PDF files at his website: http://www.jalaltoufic.com. He was most recently a participant in Sharjah Biennial 11; the 9th Shanghai Biennale; Documenta 13; Art in the Auditorium III (Whitechapel Gallery London); and Six Lines of Flight (San Francisco Museum of Modern Art). In 2011, he was a guest of the Artists-in-Berlin Program at DAAD.

Walid Raad is an artist and a Professor of Art in The Cooper Union (New York, USA). Raad’s works include The Atlas Group, a fifteen-year project between 1989 and 2004 about the contemporary history of Lebanon, and the ongoing projects Scratching on Things I Could Disavow and Sweet Talk: Commissions (Beirut).

Walid Sadek is an artist and writer living in Beirut. His early work investigates the familial legacies of the Lebanese civil war. He later began to posit, mostly in theoretical texts, ways of understanding the complexity of lingering civil strife in times of relative social and economic stability. His later written work proposes a theory for a post-war society disinclined to resume normative living. More recently, his artworks and written texts seek poetics for a sociality governed by the logic of protracted war and search for eruptive temporalities to challenge that same protractedness. He is associate professor in the department of Fine Arts and Art History at the American University of Beirut.

Akram Zaatari is a filmmaker, photographer, archival artist and curator. He co-founded the Arab Image Foundation in 1997. His work is largely based on collecting, studying and archiving the photographic history of the Arab World. He has shown his films, videos, photographs, and other documents in institutions such as the Centre Pompidou in Paris, MoMA in NY, Tate Modern in London, Modern Museet in Stockholm, Macba in Barcelona and Kunsthaus Zurich. He has taken part of Documenta 13 (2012), the biennials of Venice, Gwangju, Liverpool, Istanbul, Sao Paulo, and Sydney.