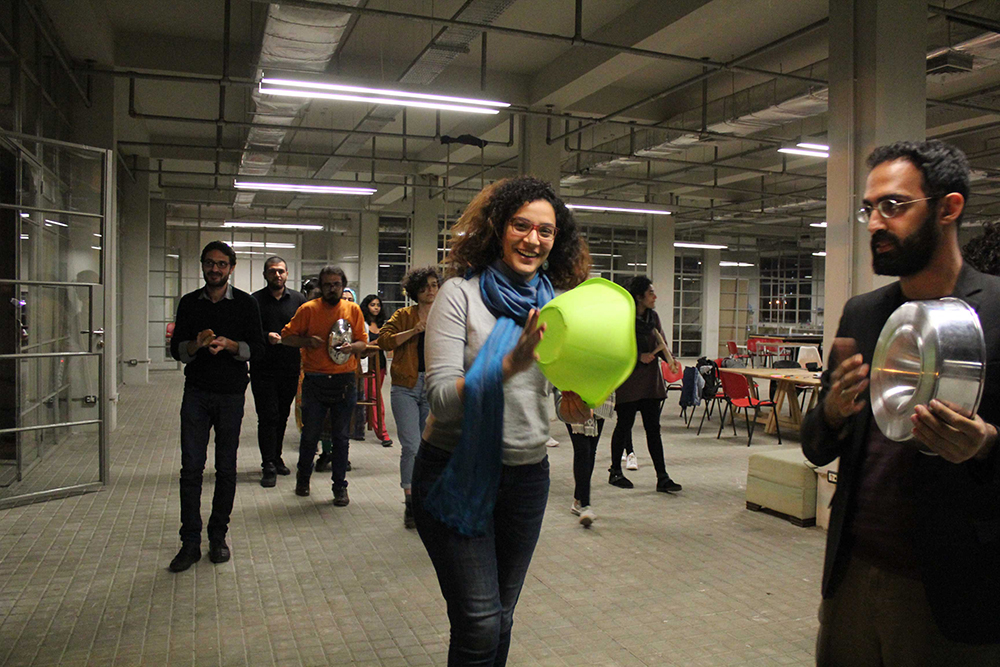 Launched by Ashkal Alwan in Beirut in 2011, the Home Workspace Program (HWP) is a ten-month arts study program that enrolls up to 18 fellows per year. The program is open to artists from Lebanon and the world over to develop their formal, technical and theoretical skills in a critical setting, and provides enrolled fellows with feedback and resources to facilitate and support their art practice. A public component is accessible to non-enrolled participants through lectures, seminars, and workshops. Tuition and public activities in the HWP are free. HWP was initially developed to explore trans-disciplinary, critical models of art-focused study in Lebanon and the wider Arab region.

In response to the political and material urgencies in Lebanon that continue to threaten cultural and educational infrastructures, the tenth edition of HWP will be an open year. This means that HWP’s programs are available to anyone wishing to attend.

HWP 2021 will be divided into four individual chapters unfolding over the course of seven months. Each chapter will last for four to five weeks and will be organized by a Lead Professor who will (1) design a specific curriculum responding to a set of theoretical and aesthetic concerns and (2) invite up to three Visiting Professors to each lead a seminar, workshop, or collective reading session.

Skills-based workshops will be held in parallel with the individual chapters throughout the tenth edition.

Office Hours will be a 25-week-long program of one-on-one sessions spread throughout the year.

All artists, writers, and cultural workers from Lebanon and elsewhere are invited to pre-register and take part in individual chapters - each containing their own set of seminars, workshops, lectures, and critique sessions. The chapters will unfold over the course of seven months, beginning in January 2021 and ending in July 2021.

Lawrence Abu Hamdan is a “Private Ear”. His interest with sound and its intersection with politics originate from his background as a touring musician and facilitator of DIY music. The artist's audio investigations have been used as evidence at the UK Asylum and Immigration Tribunal and as advocacy for organisations such as Amnesty International and Defence for Children International together with fellow researchers from Forensic Architecture.  Abu Hamdan completed his PhD in 2017 from Goldsmiths College University of London. He has exhibited his work at the 58th Venice Biennale; the 11th Gwangju Biennial; the 13th and 14th Sharjah Biennial; FKA Witte De With, Rotterdam; Tate Modern Tanks and Chisenhale Gallery, London; Hammer Museum, Los Angeles; Portikus, Frankfurt; The Showroom, London; and Casco, Utrecht. His works are part of collections at MoMA, Guggenheim, Van AbbeMuseum, Centre Pompidou and Tate Modern. Furthermore, he has been awarded the 2019  Edvard Munch Art Award, the 2016 Nam June Paik Award for new media, and in 2017 his film Rubber Coated Steel won the Tiger Short Film Award at the Rotterdam International Film Festival.  For the 2019 Turner Prize, Abu Hamdan, together with nominated artists Helen Cammock, Oscar Murillo and Tai Shani, formed a temporary collective in order to be jointly granted the award.

Adrian Lahoud is an architect. His work operates around three interrelated themes: the problem of scale, climate justice and a critique of the concept of shelter within architecture. Prior to his current role as Dean of the School of Architecture at the Royal College of Art he was director of the MA programme at the Centre for Research Architecture Goldsmiths, research fellow in Forensic Architecture and studio master in Projective Cities at the Architectural Association. Recent exhibits include “The Shape of the Eclipse” in Let’s Talk about the Weather: Art and Ecology in a Time of Crisis (Sursock Museum, Beirut), “Secular Cosmologies” in After Belonging: Triennial of Architecture Oslo, and “Floating Bodies” inForensis: The Architecture of Public Truth (Haus der Kulturen der Welt, Berlin). Recent publications include The Mediterranean: A New Imaginary in New Geographies (Harvard University Press), “Floating Bodies” in Forensis: The Architecture of Public Truth (Sternberg Press), “The Bodele Declaration” in Grain, Vapour, Ray: Textures of the Anthropocene (MIT Press), “Nomos and Cosmos” in Supercommunity (e-flux). And ”'Fallen Cities” in The Arab City: Architecture and Representation (Columbia University Press). His work has been translated into Arabic, French, Mandarin, and Spanish and featured in numerous publications including The Economist, The Guardian, The Hindu Times, Art Review, Frieze and Metropolis. In 2019, he curated the inaugural Sharjah Architecture Triennial on Rights of Future Generations and acts as co-chair of the charter working group

Chapter 2: “sometimes a wildebeest on the tundra remembers a former life”: The Quandaries, Vagaries, Riddles, and Torment of Archive
by Rasha Salti

Rasha Salti is a researcher, writer, and curator of art and film, working and living between Beirut and Berlin. She co-curated several film programs, including The Road to Damascus, with Richard Peña, a retrospective of Syrian cinema that toured worldwide (2006-2008); Mapping Subjectivity: Experimentation in Arab Cinema from the 1960s until Now, with Jytte Jensen (2010-2012) showcased at the MoMA in New York, and Saving Bruce Lee: African and Arab Cinema in the Era of Soviet Cultural Diplomacy with Koyo Kouoh at the Haus der Kulturen der Welt (2018). In 2011, she was one of the co-curators of the 10th edition of the Sharjah Biennial, and in 2015, she co-curated with Kristine Khouri the exhibition Past Disquiet: Narratives and Ghosts from the Exhibition of International Art for Palestine (Beirut, 1978), at the Museum of Contemporary Art in Barcelona (MACBA), at the Haus der Kulturen der Welt (HKW) in Berlin, in 2016, at the Museo de la Solidaridad Salvador Allende (MSSA) in Santiago de Chile and at the Sursock Museum, both in 2018. In 2006, she edited Insights into Syrian Cinema: Essays and Conversations with Filmmakers (ArteEast and Rattapallax Press) and in 2009, she collaborated with photographer Ziad Antar on an exhibition and book titled Beirut Bereft, The Architecture of the Forsaken and Map of the Derelict. In 2010, she co-edited I Would Have Smiled: A Tribute to Myrtle Winter-Chaumeny with Issam Nassar, a book dedicated to the legacy of British photographer and founder of the UNRWA photographic archive. In 2018, she co-edited with Kristine Khouri, Past Disquiet: Artists, International Solidarity and Museums in Exile, which was published by the Museum of Modern Art, Warsaw. And in 2019, she collaborated with Christoph Terhechte on This Notebook Belongs to Rasha Salti, If Found…  published by Ashkal Alwan in the framework of the 8th edition of Home Works. Salti has also participated in pedagogical laboratories; in 2015 and 2016 she taught at the Sarajevo Film Factory, established by filmmaker Belà Tarr, and in 2017 she directed RAW Academy’s first session, titled “Hunger”. She was born in Canada, in 1969, to Lebanese and Palestinian parents. She was raised in Beirut, earned a B.A. in Fine Arts from Georgetown University in 1992, and a Masters in the Arts from The Graduate Faculty and the New School University in 2002.

Marwa Arsanios is an artist, filmmaker and researcher who reconsiders politics of the mid-twentieth century from a contemporary perspective. She approaches research collaboratively and seeks to work across disciplines. Arsanios has been the subject of solo exhibitions at Skuc Gallery, Ljubljana (2018); Beirut Art Center (2017); Hammer Museum, Los Angeles (2016); FKA Witte de With Center for Contemporary Art, Rotterdam (2016); Kunsthalle Lissabon, Lisbon (2015); and Art in General, New York (2015). Her work has also been shown in a number of group exhibitions, including as part of the Berlin Biennial (2020), Warsaw Biennial (2019), Sharjah Biennial (2019), Gwangju Biennial (2018), and Lulea Biennial (2018),  as well as in From Ear to Ear to Eye, Nottingham Contemporary, UK (2017); Home Return, Maxxi Museum, Rome (2017); Let’s Talk about the Weather, Sursock Museum, Beirut (2016); HERE AND NOW, Ludwig Museum, Cologne (2016); Thessaloniki Biennial (2015); Home Works Forum, Ashkal Alwan, Beirut (2010, 2013, 2015); Here and Elsewhere, New Museum, New York (2014); 55th Venice Biennale (2013); Meeting Points 7 – Ten Thousand Wiles and a Hundred Thousand Tricks, M HKA, Antwerp (2013); In Other Words, nGbK, Berlin (2012); and 12th Istanbul Biennial (2011), among others. She was awarded the Georges de Beauregard award at FID Marseille (2019), the Special Prize of the Pinchuk Future Generation Art Prize (2012), and was nominated for the Paulo Cunha e Silva Art Prize (2017) and the Han Nefkens Foundation Award (2014). She was also a fellow at Akademie Schloss Solitude, Stuttgart, Germany (2014) and Tokyo Wonder Site, Tokyo Arts and Space (2010). She is the co-founder of 98weeks Research Project. Arsanios received a Master of Fine Art, University of the Arts London (2007) and was a researcher in the Fine Art Department at Jan Van Eyck Academie, Maastricht (2011–2012). She is currently a PhD candidate at the Akademie der bildenden Kunst in Vienna.

Chapter 5: Yogurt and Other Spaces
by Daniel Blanga Gubbay and Zeynep Öz

Daniel Blanga Gubbay is a Brussels-based curator and researcher. He is currently the artistic co-director of the Kunstenfestivaldesarts in Brussels. He has worked as an educator and an independent curator for public programs, among which: Four Rooms (2020); Can Nature Revolt? for Manifesta 12 (2018, Palermo); Black Market (2016, Brussels); and The School of Exceptions (2016, Santarcangelo). He has worked as co-curator for LiveWorks, a performing art platform, and was head of the Department of Arts and Choreography (ISAC) at the Royal Academy of Fine Arts of Brussels. He holds a PhD in Cultural Studies from the University of Palermo. Recent articles appeared in Makhzin, South as a State of Mind, and Mada Masr. Recent presentations include: Politics of Co-Imagination (2019, Tangier); Dance Under Cover of a Fictional Rhythm (2018, Sharjah, UAE); and The Movement as Living Non-Body (2018, New York).

Zeynep Öz is a curator and writer based in Istanbul. She was the curator of the Pavilion of Turkey at the 58th International Art Exhibition, la Biennale di Venezia (2019), and the BACA Award exhibition of Marwan Rechmaoui at the Bonnefantenmuseum, which travelled to the Sharjah Art Foundation (2019). She was one of the interlocutors of the Sharjah Biennial 13, curating the biennial’s off-site project in Istanbul in 2017, as well as co-curator of the Aichi Triennale 3 in 2016. Öz was the co-founder of Spot Projects in Istanbul and director of the Spot Production Fund from 2011 to 2017, during which she curated the Produce series (I, II, III), commissioning over 30 works. She also curated the film programme Greatest Common Factor, at SALT, Istanbul (2016), the project Plastic Veins at Home Works VI, Ashkal Alwan, Beirut (2013), and Selling Snails in the Muslim Neighborhood at the Westfälischer Kunstverein, Münster (2013). Öz has been teaching at the Bogazici University in Istanbul and has been on the curricular and selection committees of the Home Workspace Program of Ashkal Alwan since 2015. She has contributed to various publications, including Ibraaz,Istanbul Art News, and Artful Living, and to catalogues for exhibitions at CCS Bard College, Athens National Museum of Contemporary Art, Rampa Gallery, Full Art Prize, British Council and Kunstverein Medienturm.

In parallel to the ongoing chapters, HWP will offer ten skills-based workshops, that are also free and open to all who pre-register. These workshops will be held during the evening or weekends, and will offer participants hands-on experience with various technical tools. They are:

In addition to catering to skills-based workshops, the following work stations will be available for any artist or practitioner to use throughout the year:

Each week, and for a total period of 25 weeks, an artist, writer, or scholar will be made available, either through Zoom or in-person, to give feedback to, and/or conduct one-on-one sessions with practitioners. Ashkal Alwan will act as a mediator between advisors and practitioners, announcing available time slots two weeks ahead in order to facilitate registration.